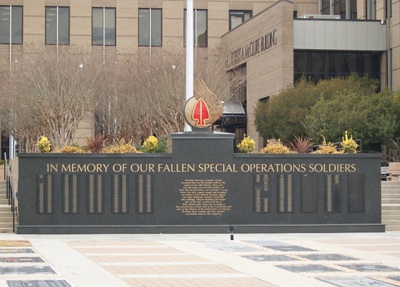 USASOC Memorial Wall
Fort Bragg
View complete article and references at Commemorative Landscapes of North Carolina at: https://docsouth.unc.edu/commland/monument/415
Description: The monument consists of a black granite wall similar to the Vietnam Memorial Wall in Washington, D.C. The wall is approximately thirty feet long by six feet high and topped by a sculpture known as "Eagle Rising", a large circular bronze ornament with the figure of an eagle ready to take flight and the insignia of the United States Army Special Operations Command (Airborne), a sword within a red shield. Small plaques with inscriptions of each individual special operations soldier killed are affixed to the surface of the granite. The wall is divided into conflicts from the Korean War to 21st Century conflicts in Iraq and Afghanistan. It memorializes more than 1,100 fallen soldiers and contains space for continued memorials for the next quarter century. A flag pole stands at the top of platform behind the memorial and flies the American flag at half mast.
Inscription:
Front: IN MEMORY OF OUR FALLEN SPECIAL OPERATIONS SOLDIERS / Welcome Kinsman, Comrade, Friend. / Recorded here on this humble Wall are the / names of our fallen Heroes. They were / and will always be cherished Soldiers of / Army Special Operations, our comrades in arms. / Know that they eagerly sought and accepted / our Nation's most difficult missions against / our most dangerous enemies. Know that / they willingly endured hardship and danger / and, at the end, sacrificed all for us. / With solemn pride, know that in doing so / they proved true to their oath to the Constitution and / duty to the Citizens of the United States of America. / To them, their example and their memory / we humbly dedicate this memorial.
Rear, on ornament: UNITED STATES ARMY / SPECIAL OPERATIONS COMMAND / GREATER LOVE THAN / THIS NO ONE HAS, THAT / ONE LAY DOWN HIS LIFE / FOR HIS FRIENDS. / - JOHN 15:13
Dedication date: 5/27/2010
Creator: Lorenzo Ghiglieri, Sculptor Daniel Telles, Designer
Materials & Techniques: Granite
Sponsor: USASOC Soldier Family and Command Support Association
Cost: $351000
Unveiling & Dedication: The monument was unveiled during Memorial Day services and attended by hundreds of veterans, service members and families. General John F. Mulholland, Commander of the USASOC, dedicated the memorial to the memory of the fallen soldiers of the United States Army Special Operations Command. During the dedication, the names of the 35 special operations soldiers killed during the previous year in Operation Iraqi Freedom and Operation Enduring Freedom were read, and a bell was tolled for each.
Post dedication use: Each Memorial Day, a ceremony is held where the names of the special operations soldiers killed in the preceding year are added to the wall.
Subject notes: Established in 1952, The United States Army Special Operations are an elite branch of the military trained to engage in special operations and military intelligence development. Their special mission includes training friendly foreign military organizations, unconventional warfare, reconnaissance, and counter-terrorism.
The wall was a replacement of an earlier memorial wall on the plaza. The design was developed by Daniel Telles of the U.S. Army Special Operations Command history office, and the sculptural ornament, known as "Eagle Rising", was created by Italian sculptor Lorenzo Ghiglieri, a Korean War veteran.
Location: The memorial wall faces southwest and is located between two sets of stairs leading from the plaza to the entrance of the U.S. Army Special Operations Command headquarters building. The building is located at the intersection of Yadkin Road and Desert Storm Road.
Landscape: The memorial wall is located in the memorial plaza. It sits at the end of the paved plaza directly opposite the statue of "Bronze Bruce." The memorial plaza and garden area also contains the Major Richard "Dick" Meadows Statue.
City: Fort Bragg
County: Cumberland
Subjects: Iraq War, 2003-2011,Operation Enduring Freedom,Other Wars,Tragedy
Latitude:
35.11016
Longitude:
-79.00235
Subjects:
Monuments
Places
Authors:
Commemorative Landscapes of North Carolina
Origin - location:
Cumberland County
Fort Bragg
From:
Commemorative Landscapes of NC, University of North Carolina Chapel Hill.

I'm a volunteer looking to

I'm a volunteer looking to find pictures of our fallen heroes in NAM. Th search
has gone on for many years. We are done to needing less than 200. We would
like to find , we need 6 pictures of Helicopter Heroes, Airmen or ground support
of the fallen. I can supply a list of names. I hope that you can can advise
a path to take. Thank you for your time

I am sending your question to our reference librarians who can better assist you.