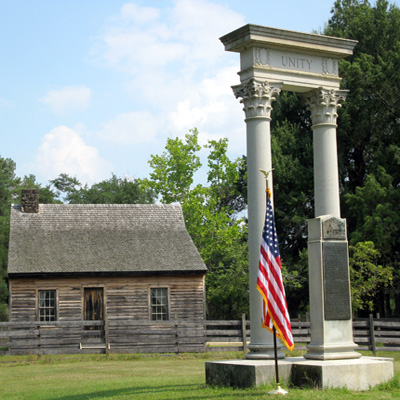 Bennett Place was named a state historical site in 1923 after a push by the State Legislature (particularly Rueben O. Everett and Frank Fuller) and the donation of the site and the memorial by the Morgan Family (Samuel Morgan had owned the land, but died in 1921). Those involved wished to build a "monument to national unity at the site".

Inscription:
Front: ONE HUNDRED FEET EAST OF THIS SPOT IN THE BENNETT HOUSE GENERAL JOSEPH E. JOHNSTON AND MAJOR GENERAL WILLIAM T. SHERMAN MET AT NOON, APRIL 17, 1865, TO DISCUSS TERMS OF A PROPOSED SURRENDER. THEY MET IN THE HOUSE AGAIN ON APRIL 18 AND WROTE AND SIGNED A "BASIS OF AGREEMENT," UNDER THE TERMS OF WHICH GENERAL JOHNSTON AGREED TO SURRENDER ALL THE CONFEDERATE ARMIES THEN IN THE FIELD. PRESIDENT ANDREW JOHNSON REJECTED THE TERMS AGREED UPON, SENT ORDERS TO GENERAL SHERMAN ON APRIL 24 "TO GIVE FORTY-EIGHT HOURS' NOTICE AND RESUME HOSTILITIES AT THE END OF THAT TIME," AND ORDERED GENERAL GRANT TO "DIRECT MILITARY MOVEMENTS". GENERAL GRANT ARRIVED IN RALEIGH ON APRIL 24, BUT OUT OF CONSIDERATION FOR GENERAL SHERMAN HE DID NOT ASSUME COMMAND.


ON THE EVENING OF APRIL 25, GENERAL JOHNSTON "ASKED ANOTHER INTERVIEW" WITH GENERAL SHERMAN "TO RENEW NEGOTIATIONS," AND ON THE TWENTY-SIXTH AT 2 P.M. THE GENERALS MET A THIRD TIME IN THE BENNETT HOUSE AND SIGNED THE TERMS OF "A MILITARY CONVENTION." UNDER WHICH 36,817 CONFEDERATE SOLDIERS IN NORTH CAROLINA AND 52,453 IN GEORGIA AND FLORIDA LAID DOWN THEIR ARMS.
THIS MONUMENT THUS MARKS THE SPOT WHERE THE MILITARY FORCE OF THE UNITED STATES OF AMERICA FINALLY TRIUMPHED AND ESTABLISHED AS INVIOLATE THE PRINCIPLE OF AN INDISSOLUBLE UNION. IT MARKS ALSO THE SPOT OF THE LAST STAND OF THE CONFEDERACY IN MAINTAINING ITS IDEAL OF INDESTRUCTIBLE STATES - AN IDEAL WHICH PRESERVED TO THE AMERICAN UNION BY VIRTUE OF THE HEROIC FIGHT GROWS IN STRENGTH FROM YEAR TO YEAR.

Rear: IN FULFILLMENT OF THE WISHES OF SAMUEL TATE MORGAN AND IN HIS MEMORY, THIS MONUMENT AND GROUNDS ARE GIVEN TO THE STATE OF NORTH CAROLINA BY HIS FAMILY.

Sponsor: Samuel Tate Family and State of North Carolina. The State Legislature formed the Bennett Place Memorial Commission with the intent of building a monument to national unity at the site.

Unveiling & Dedication: The dedication ceremony was directed by Julian Carr and Bennehan Cameron.

Post dedication use: In the 1970s, Bennett Place became a State Historic Site. A modern visitor center was built on the site; it is free and open to the public. The site is periodically used to for various civil war re-enactments.

Subject notes: Bennett Place was the site of the largest troop surrender of the Civil War. Confederate General Joseph E. Johnston and Union General William T. Sherman met on three occasions at the farmhouse of William Bennett, halfway between Sherman's headquarters in Raleigh and Johnston's in Hillsborough. They ultimately worked out terms to surrender over 89,000 Confederate troops in the field in the Carolinas, Georgia and Florida.

Controversies: There was some objection to the construction of the monument from The United Daughters of the Confederacy, who felt the endeavor constituted a monument of defeat.

Former Locations: The Bennett Place farmhouse that burned down October 12, 1921, was reconstructed in the 1960's. Charles Pattishall, a Durham businessman with an interest in Civil War history, was appointed to a committee headed by Dr. Lenox Baker to plan a Bennett house reconstruction. He noted that the former William Haynes Proctor house at 1917 Chapel Hill Road, which was in the process of being torn down, was similar to the original Bennett farmhouse. It has a Victorian exterior of log structures of similar size and vintage as the Bennett structures. The main structure was found to fit the old house foundation very closely. It appears that one wing of the house was separated and transformed into the kitchen structure. The reconstructed smokehouse may have come from this structure as well.

Landscape: The monument sits in front of the reconstructed Bennett Place farmhouse.