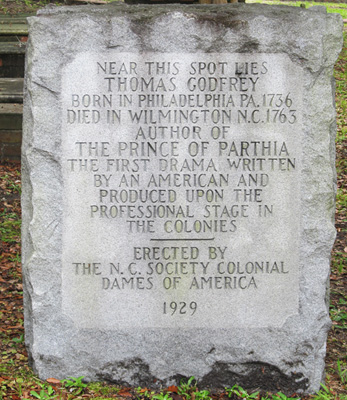 Description: The grave marker, approximately three feet tall, is a rough cut block of granite with a partially polished face. The face bears an inscription to the memory of Godfrey.

Inscription:
NEAR THIS SPOT LIES / THOMAS GODFREY / BORN IN PHILADELPHIA PA. 1736 / DIED IN WILMINGTON N.C. 1763 / AUTHOR OF / THE PRINCE OF PARTHIA / THE FIRST DRAMA WRITTEN / BY AN AMERICAN AND / PRODUCED UPON THE / PROFESSIONAL STAGE IN / THE COLONIES / ERECTED BY / THE N.C. SOCIETY COLONIAL / DAMES OF AMERICA / 1929

Sponsor: The N.C. Society of Colonial Dames of America

Subject notes: Thomas Godfrey was born in Philadelphia, the son of Thomas Godfrey the inventor. The elder Godfrey was the inventor of the navigation instrument, the octant. The younger Godfrey had a very short life, living to the age of twenty-seven. He served in the Seven Years' War after being apprenticed to a watch maker, and subsequently located to Wilmington where he worked as a merchant's factor and where he reportedly wrote "The Prince of Parthia." The play has been regarded as the first to be written and performed in the American Colonies. Godfrey also penned a number of poems.

Location: The marker is located in the graveyard of St. James Church, on the corner of 4th and Market Streets.

Landscape: The marker sits in the grass in the graveyard next to the church buildings. The graveyard is separated from the street and sidewalk by a low gridiron fence and is graced by shrubs, plantings, and mature shade trees.