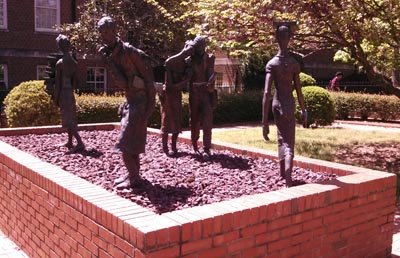 Description: The Student Body monument originally stood outside Davis Library; however the subject matter sparked immediate controversy. The monument contains seven small copper statues of students engaged in representative student activities: an African American man spinning a basketball on his finger, an African American woman balancing a book on her head, an Asian American woman carrying a violin, and a white woman holding an apple and leaning on the shoulder of a man. The student body reacted to the depictions, labeling them as cultural steroetypes.


Image: Photograph of sculpture in front of Davis Libary

Unveiling & Dedication: The monument was unveiled in 1990 and was met with immediate criticism from the student body, claiming that the monument helped to perpetuate stereotypes.

Subject notes: According to Julia Balk, the creator, the monument represents the diversity of campus life at Carolina.

Controversies: Despite the claims by Julia Balk, students felt the sculpture presented a series of stereotypes that should be fought, not displayed on campus. The UNC Community Against Offensive Statues was founded in order to create petitions lobbying for the removal of the monument. A few months after the monument was unveiled, it was vandalized; the figurines were covered with mud and red paint and the basketball was stolen. The University then decided to move the monument to a less prominent location. The basketball player and violin player were later removed without explanation.

Location: The monument sits behind Hamilton Hall and Manning Hall a short walk from Cameron Avenue.

Former Locations: The sculpture was originally located in the plaza in front of Davis Library.

Landscape: Located behind Hamilton Hall and Manning Hall, the monument is in an enclosed garden.