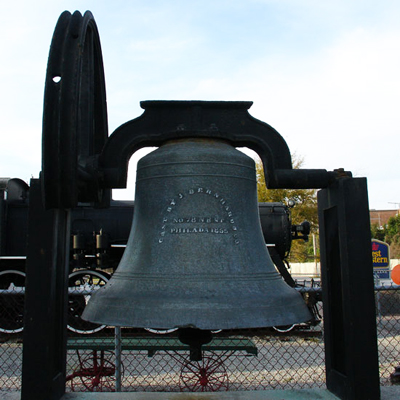 Description: This large brass bell has been preserved as a monument to North Carolina's railroad heritage and specifically to the historic role that the City of Wilmington played as the headquarters of the Atlantic Coast Line. The monument is composed of the bell attached to a yoke anchored to the base below. The base contains a bronze plaque with the commemoration. The bell may still be rung.


Images:
Plaque |
The bell with the Red Caboose


Plaque: PRESENTED TO THE CITY OF WILMINGTON / OCTOBER 16, 1964 / IN COMMEMORATION OF THE MORE THAN 100 YEARS / THAT WILMINGTON SERVED AS THE GENERAL HEAD- / QUARTERS OF ATLANTIC COAST LINE RAILROAD AND / ITS PREDECESSOR COMPANIES. / THIS HISTORIC BELL ANNOUNCED THE DEPARTURE / OF ALL PASSENGER TRAINS FROM THE TIME IT WAS / ERECTED IN 1856 UNTIL THE NEW STATION WAS BUILT / IN 1963.

Subject notes: The bell was known nationwide for its ringing to alert passengers that the time to board was near. The Atlantic Coast Line was formed by the mergers of a number of prominent southern rail companies and became the main rail line in the southeast, with its headquarters at Wilmington. In the 1960s the line moved its headquarters to Jacksonville, Florida. A new station was constructed in Wilmington in 1963, and the bell was given to the City of Wilmington in 1964.

Location: The bell is located in the Heritage Garden of the Railroad Heritage Museum on the southeast side of the intersection of Estelle Lee Drive and Nutt Street. It sits at the northeast section of the garden, near the sidewalk, and several steps from the Red Caboose.

Former Locations: During its active years announcing arrivals and departures, the bell was located at the station of the Atlantic Coast Line on Front and Red Cross Streets. When the headquarters moved to Florida and the Wilmington passenger station was relocated, the bell may have been relocated to the new station at that time.