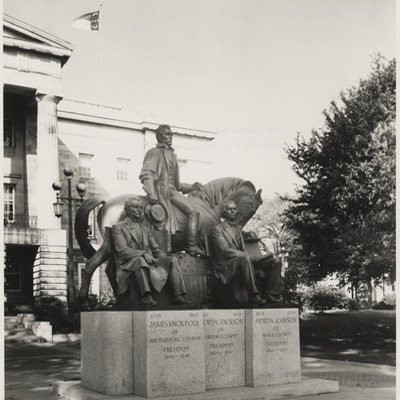 Description: A shield bearing the stars and stripes is flanked by James K. Polk, holding a map, and Andrew Johnson, holding the Constitution. Behind them, Andrew Jackson sits proudly on his horse and holding his hat to his right side.

Unveiling & Dedication: President Truman gave an address at the dedication ceremony of the monument. N.C. Governor R. Gregg Cherry, Secretary of the Army Kenneth Royall, and Senator Clyde Hoey attended as well. Descendents of each president participated in the unveiling.

Controversies: All of these men were elected president while living in Tennessee, so there is some dispute as to the actual "home" states of these three presidents.

Location: The monument is located on the East side of Union Square, the State Capitol grounds in Raleigh.

Former Locations: None; however, two coastal mortars displayed near this monument were originally displayed at Fort Macon, and were moved to their current location in 1903.