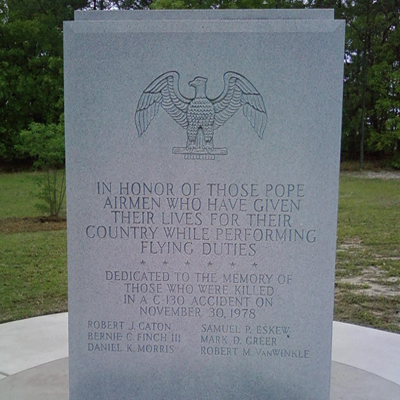 Inscription:
Face commemorating the 1978 accident: IN HONOR OF THOSE POPE / AIRMEN WHO HAVE GIVEN / THEIR LIVES FOR THEIR / COUNTRY WHILE PERFORMING / FLYING DUTIES / DEDICATED TO THE MEMORY OF / THOSE WHO WERE KILLED / IN A C-130 ACCIDENT ON / NOVEMBER 30, 1978 / ROBERT J. CATON -- SAMUEL P. ESKEW / BERNIE C. FINCH III -- MARK D. GREER / DANIEL K. MORRIS -- ROBERT M. VANWINKLE

Unveiling & Dedication: Surviving family of the airmen were present at the unveiling, which served as a memorial service dedicated to those faithful soldiers who lost their lives tragically.

Subject notes: The Monument was dedicated to two groups of "Pope Airmen" who lost their lives in accidents while serving their country. On November 30, 1978 a C-130 crashed approximately 34 miles west of Charleston, S.C. On April 29, 1992, a C-130 crashed into Blewett Falls Lake, N.C. Witnesses said the cargo plane circled the lake for about fifteen minutes before rolling over and plunging into the water. All nine crew were killed.

Location: The monument is located along a walkway next to Reilly Road in Fort Bragg.

Landscape: The marker rests atop a circular stone base within a stone walkway, with woods bordering the site. A number of other memorials, including the Lt. Harley Pope Monument, are located nearby along the walkway. Four retired aircraft are displayed on the other side of Reilly Road.

Capt. Gabrielle Magrane is family, and perished in the 1992 accident. Is the memorial open to the public? Can I visit it?

Sam Eskew was my flight

I still remember being told of this accident. Crushing.

I am so sorry for your loss.