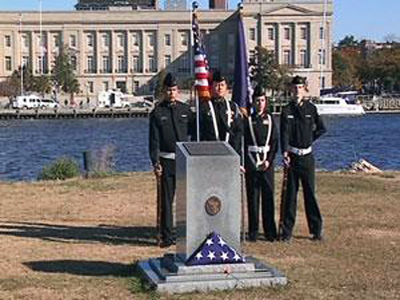 Pearl Harbor Memorial
Wilmington
View complete article and references at Commemorative Landscapes of North Carolina at: https://docsouth.unc.edu/commland/monument/432
Description: This monument, dedicated to U.S. military personnel killed in action during the December 7, 1941 attack on Oahu, Hawaii, is composed of a small granite stele with an inscribed bronze plaque. The stele is approximately three feet tall, with a rectangular plaque bearing the commemoration set in the slightly angled top face. The front of the stele bears a small bronze medallion with the insignia of the Pearl Harbor Survivors Association, the memorial's sponsor, and a small descriptive plaque beneath it. The stone rests on a thin square granite base, and the entire structure rests on a low square masonry stone base. Words included in the inscription -- "Remember Pearl Harbor / Keep America Alert" -- are taken from the motto of the Pearl Harbor Survivors Association: "Remember Pearl Harbor--Keep America Alert-- Eternal Vigilance is the Price of Liberty."
Inscription:
Plaque, top: IN MEMORY OF MEMBERS / OF THE U.S. MILITARY FORCES / KILLED IN ACTION DURING / THE ATTACK ON OAHU, HAWAII / DECEMBER 7, 1941 / NORTH CAROLINA CHAPTER NO. 1 / PEARL HARBOR / SURVIVORS ASSOCIATION / REMEMBER PEARL HARBOR / KEEP AMERICA ALERT
Base, top: MAY THEY REST IN PEACE
Dedication date: Sometime after 1958.
Materials & Techniques: Granite stele, bronze plaques, masonry stone base
Sponsor: North Carolina Chapter 1 of the Pearl Harbor Survivors Association
Post dedication use: The monument has been the focus of anniversary services commemorating both the fallen and survivors of the attack on Pearl Harbor.
Subject notes: The memorial is a commemoration, by the local North Carolina chapter of the Pearl Harbor Survivors Association, of military personnel killed in the December 7, 1941 attack by Japanese forces. The Association had its organizational beginnings in 1958 and was formally incorporated in 1962 as an organization dedicated to remembering the attack on Pearl Harbor and the American lives lost. Local chapters around the country installed similar monuments in the 1960s. The national association was granted a Federal charter in 1985, however due to declining ranks of survivors, it disbanded in December of 2011.
Location: The memorial is located in Battleship Park. The front of the marker faces roughly west, and the rear faces the waterfront.
Landscape: The memorial sits in the grass area of the park, several feet from the picnic pavilion and several feet from the waterfront of the Cape Fear River.
City: Wilmington
County: New Hanover
Subjects: World War II
Latitude:
34.23551
Longitude:
-77.95197
Subjects:
Monuments
Places
Authors:
Commemorative Landscapes of North Carolina
Origin - location:
New Hanover County
Wilmington
From:
Commemorative Landscapes of NC, University of North Carolina Chapel Hill.