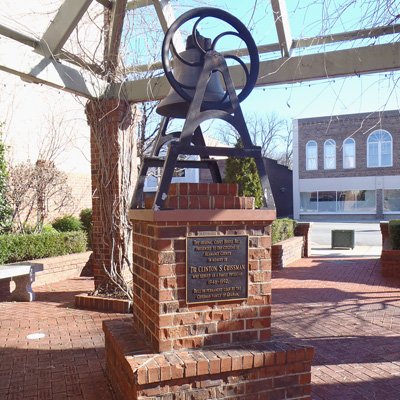 Original Courthouse Bell
Graham
View complete article and references at Commemorative Landscapes of North Carolina at: https://docsouth.unc.edu/commland/monument/254
Description: The 400-pound cast metal bell hangs from a yoke mounted atop a brick base. The base displays a plaque honoring Dr. Clinton S. Crissman, a local doctor who was honored by his family in the preservation and mounting of the historic bell and its installation for the Alamance County sesquicentennial celebration. The waist of the bell is engraved with the date and location of its casting, and the bell's clapper hangs below.
Images: Plaque | Setting and view of courthouse and Confederate Monument
Inscription:
Plaque: THE ORGINAL COURT HOUSE BELL / PRESENTED TO THE CITIZENS OF ALAMANCE COUNTY / IN MEMORY OF / DR. CLINTON S. CRISSMAN / WHO SERVED AS A FAMILY PHYSICIAN / 1946-1992. / BELL ON PERMANENT LOAN BY THE CRISSMAN FAMILY OF GRAHAM.
Bell: WEST TROY, N.Y. 1859
Dedication date: 1850s and again at the County's 150th anniversary on April 24, 1999.
Creator: H.F. Mitchell Construction, Builder
Materials & Techniques: Brick platform, black brass plaque, cast metal bell
Sponsor: Crissman family
Unveiling & Dedication: The courthouse bell was originally dedicated sometime around 1859. It was rededicated along with the new park across from the historic courthouse on April 24, 1999 on the occasion of the County's sesquicentennial.
Post dedication use: The bell was originally located on the old courthouse, but after the courthouse was demolished it was moved and lost for several years. It was not until 1999 that the bell was relocated to Sesquicentennial Park on Alamance County's 150th birthday. The bell now stands in the court square at the Sesquicentennial Park. Community events are held in the vicinity of the park.
Subject notes: The bell originally was located on top of the roof of the old courthouse building completed in 1852. The old building was demolished and the bell removed in preparation for building a new courthouse in 1923. The new courthouse was completed on November 23, 1924, apparently without the old bell.
The bell is owned by the Crissman family who provided it on loan for preservation in the city park in honor of Dr. Clinton Crissman. Dr. Crissman opened a family medical practice in 1946 after serving in the Army Air Corps in World War II. He also served on the board of education of Alamance County from 1965 to 1971.
Former Locations: The bell first stood in the Court Square of the original brick 1850 courthouse. Now the bell is located in the Sesquicentennial Park across from the new Courthouse.
Landscape: The monument is located in the Sesquicentennial Garden across from the Court House Square and in view of the Confederate Monument. The bell stands on a brick base covered by the steel and brick pavilion. Small bushes and plantings surround the pavilion.
City: Graham
County: Alamance
Subjects: Historic Civic Figures,Historic Philanthropic Figures,Local History
Latitude:
36.06959
Longitude:
-79.39977
Subjects:
Monuments
Places
Authors:
Commemorative Landscapes of North Carolina
Origin - location:
Alamance County
Graham
From:
Commemorative Landscapes of NC, University of North Carolina Chapel Hill.