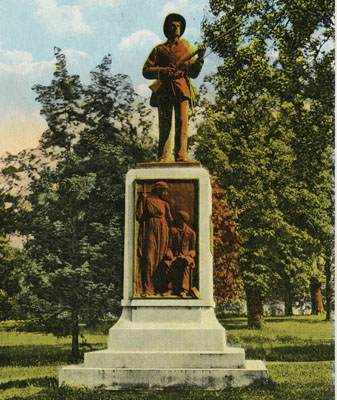 Memorial to Civil War Soldiers of the University
UNC (Chapel Hill) [Removed]
View complete article and references at Commemorative Landscapes of North Carolina at: https://docsouth.unc.edu/commland/monument/41
Description: The monument depicts a Confederate soldier facing north while grasping his rifle firmly in both hands. He lacks a cartridge box for ammunition. On the front of the monument a brass plaque depicts a woman clad in classical dress, representing North Carolina, resting her hand on the shoulder of a seated student, convincing him to take up arms.
Plaque Image
Nickname: Silent Sam, originally brought about due to the statue's lack of ammunition which would cause him to be unable to fire his weapon.
Inscription:
Left: ERECTED UNDER THE AUSPICES / OF THE / NORTH CAROLINA DIVISION / OF THE UNITED DAUGHTERS OF / THE CONFEDERACY / AIDED BY THE ALUMNI OF / THE UNIVERSITY

Right: TO THE SONS OF THE UNIVERSITY / WHO ENTERED THE WAR OF 1861 - 65 / IN ANSWER TO THE CALL OF THEIR / COUNTRY AND WHOSE LIVES / TAUGHT THE LESSON OF / THEIR GREAT COMMANDER THAT / DUTY IS THE SUBLIMEST WORD / IN THE ENGLISH LANGUAGE
Images: Left Inscription Right Inscription

Dedication date: 6/2/1913
Creator: John Wilson, Sculptor Gorham Manufacturing Company, Foundry
Sponsor: North Carolina Division of the United Daughters of the Confederacy and University of North Carolina Alumni
Cost: $7500
Unveiling & Dedication: Julian Carr spoke at the dedication of the monument in 1913. His speech recounted the heroic efforts of the men the monument honored as well as the women on the home front. The speech also spoke to the racialized nature of the commemoration as Carr tells this story: "100 yards from where we stand, less than 90 days perhaps after my return from Appomattox, I horse-whipped a negro wench, until her skirts hung in shreds, because upon the streets of this quiet village she had publicly insulted and maligned a Southern lady."
Controversies: Students and members of the Chapel Hill community regularly protested the statue's racial overtones, some pushing for its removal from the UNC campus and others for its relocation to the Old Chapel Hill Cemetery. This sparked the "Real Silent Sam" movement, which sought to create dialogue regarding the meanings behind monuments and buildings on campus.
Following a white supremacy rally in Charlottesville, Virginia in August 2017, during which a counter-protestor was killed by a white supremacist, activists began a sustained campaign for the removal of the Confederate Memorial from public display on the university campus. The protests included extended vigils at the monument, campaigns to raise public awareness about the monuments’ origins, and public calls for its removal. While Gov. Roy Cooper publicly endorsed removing the monument, university leaders insisted that the 2015 Heritage Protection Act prevented the university from removing the monument without legislative approval. Throughout the academic year of 2017-2018 the monument remained the focus of protest, but no meaningful steps, other than a few public forums, were taken to reinterpret the monument or to petition the legislature for its removal. On the evening of August 20, 2018, an estimated 250 protesters gathered around the monument, and despite the presence of campus police, toppled it. The monument subsequently was moved to an undisclosed location by campus authorities. The future disposition of the monument remains unclear. University authorities have pledged to prosecute those responsible for toppling the monument.
Location: The statue faced north as if to defend the Confederate South from the armies of the United States.
Landscape: The monument sat at the center of McCorkle place on the UNC Campus. It was surrounded by campus buildings as well as a number of other monuments. The monument is currently in the custody of UNC-Chapel Hill and in storage.
City: Chapel Hill
County: Orange
Subjects: Civil War
Latitude:
35.91361
Longitude:
-79.05211
Subjects:
Monuments
Places
Authors:
Commemorative Landscapes of North Carolina
Origin - location:
Orange County
Chapel Hill
From:
Commemorative Landscapes of NC, University of North Carolina Chapel Hill.