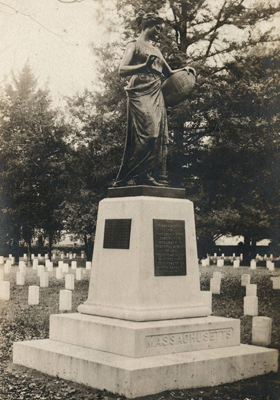 Description: The Massachusetts Monument honors the soldiers from Massachusetts who died near New Bern while serving the Union Army in the Civil War. An allegorical sculpture, the monument presents the figure of Peace. Wearing classical dress and a wreath of laurel or olive leaves on her head, the larger than life size figure holds a shield in her left hand and a writing implement in her right hand as she gazes at the inscription on the shield. The shield is inscribed to acknowledge the return to peace and unity brought about by the soldiers' service. The granite pedestal contains an inscribed metal plaque with a dedication to the Commonwealth of Massachusetts and her fallen soldiers.


Image:
Photograph of the monument's unveiling

Unveiling & Dedication: The unveiling ceremony began at 2:30 p.m. under ideal weather conditions with a crowd of over 2,000 people in the National Cemetery. All businesses in New Bern were closed as the town joined together in celebrating the memory of the Massachusetts solders. The North Carolina legislature appropriated $4,000 to ensure the travel expenses of veterans for adequate representation at the unveiling, and approximately 150 men and several women arrived from Massachusetts. General James Frankell acted as master of ceremonies, and a benediction was given by Rev. E. H. Hall, former Chaplain of the Massachusetts 44th. Addresses were made from a stand facing the monument, including the main addresses given by Judge Albert A. Putnam, Captain of the Second Heavy Artillery. Children sang "The Blue and the Grey" and "The Star Spangled Banner".


On November 17, 1909, several days following the unveiling, the New Bern Weekly Journal ran a story of the event, with the lead: "Handsome Memorial Dedicated Last Wednesday By Surviving Comrades and Citizens, A Striking And Beautiful Statue of Granite And Bronze."

Subject notes: The Massachusetts Monument was built in honor of the 600 soldiers of the Commonwealth who lost their lives in the Civil War and are buried in the National Cemetery. Only a small number died in battle, as small pox and yellow fever took the lives of the majority. North Carolinians and Northerners joined together in an event that signaled reunion.


The sculptor, Melzar Mossman, from Chicopee, Massachusetts, was a member of the 46th Massachusetts Volunteer Infantry.


New Bern National Cemetery was established in 1867. Union dead buried at other locations in North Carolina were subsequently moved to the National Cemetery following its establishment. The Massachusetts Monument at New Bern is one of four monuments sponsored by Union states that sent soldiers to North Carolina during the Civil War. The New Jersey Monument, the Rhode Island Monument, and the Connecticut Monument are all located in the cemetery.

Location: The monument is located in the southeast corner of section 8 on the north side of the drive through the cemetery. It sits several feet from the drive which is located off National Avenue.

Landscape: The monument is located in the grass-covered grounds of the cemetery surrounded by rows of small white grave markers.