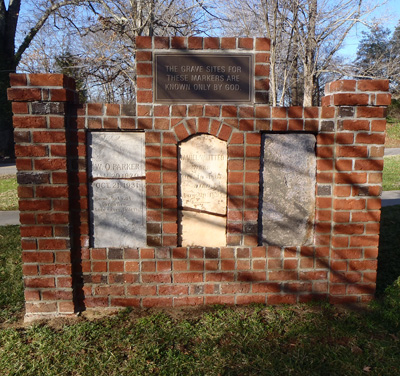 Margaret Lane Cemetery Memorial
Hillsborough
View complete article and references at Commemorative Landscapes of North Carolina at: https://docsouth.unc.edu/commland/monument/319
Description: The monument is a rectangular brick structure, approximately eight feet wide by six feet tall, and is framed on each side by a taller brick pillar. The rear of the monument, facing into the cemetery, contains three small, narrow gravestones recovered from the cemetery. One stone is marble, and the other two appear to be granite, all bearing the inscribed names of the deceased. The front of the memorial contains a bronze plaque commemorating the cemetery. On the rear, a bronze plaque commemorating those who are buried but whose names and burial locations remain unknown sits in the brick cap above the gravestones. The recovered stones bear the names of Daniel Whitted, W.O. Parker, and Nancy Wheatting.
Another memorial to those buried in the cemetery, known and unknown, The Margaret Lane Cemetery Grave Marker, sits in the center of the cemetery. It was dedicated in 1987 at the time the cemetery was restored by the Town of Hillsborough.
Images: Front view | Setting with view of street | Front plaque | Rear plaque | Daniel Whitted stone detail | W.O. Parker stone detail | Nancy Wheatting stone detail
Inscription:
Front plaque: MARGARET LANE / CEMETERY / Before 1852 to 1931 / Well before the Civil War this sacred site was set aside as a burial / place for local slaves and their families. / It remained active until / the early nineteen thirties. / Dedicated 1987
Rear plaque: THE GRAVE SITES FOR / THESE MARKERS ARE / KNOWN ONLY BY GOD.
Dedication date: 12/4/2010
Creator: Sam Dunevant, Designer, Builder
Materials & Techniques: Brick, stone, marble, bronze
Sponsor: Town of Hillsborough and the Hillsborough Tourism Board
Unveiling & Dedication: The monument was dedicated on a Saturday in early December. Approximately fifty people attended. Hillsborough Mayor Tom Stevens gave a speech, and the service included a brief sermon, recitation of the Lord's Prayer, and the singing of a hymn. Snow began to fall following the conclusion of the service. Descendants of those buried in the cemetery attended the service.
Subject notes: The marker was designed and built by Town of Hillsborough employee Sam Dunevant. It includes stones recovered from the cemetery during the earlier restoration. These stones identify specific individuals. Some 45 names are known of the approximately 150 graves that have been identified in the cemetery.
The cemetery is also known as the Old Slave Cemetery and the African American Cemetery.
Controversies: According to a pamphlet prepared by the Town of Hillsborough, in the late 1970s a group interested in building a church on the site discovered that the town did not have a deed for the land. The group filed for a quit-claim deed which the town countered and won, enabling it to retain title to the property.
Location: The memorial sits at the northeast entrance to the cemetery.
Landscape: The memorial sits in the grass, just beyond the street. Mature trees are nearby, and a bench sits a few feet from the rear face of the memorial.
City: Hillsborough
County: Orange
Subjects: African American Monuments
Latitude:
36.074
Longitude:
-79.10967
Subjects:
Monuments
Places
Authors:
Commemorative Landscapes of North Carolina
Origin - location:
Orange County
Hillsborough
From:
Commemorative Landscapes of NC, University of North Carolina Chapel Hill.