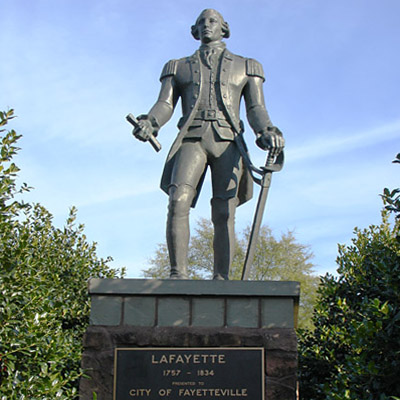 Lafayette Monument
Fayetteville
View complete article and references at Commemorative Landscapes of North Carolina at: https://docsouth.unc.edu/commland/monument/30
Description: The monument is a statue of Marquis de Lafayette standing tall with a sword at his side and a scroll of paper in his out-stretched hand. He stands with his right foot stepping forward on a stone pedestal that is covered with a bottom tier of roughly cut rocks and an upper tier of slate grey tiles.
Images: Plaque
Inscription:
LAFAYETTE / 1757-1834 / PRESENTED TO / CITY OF FAYETTEVILLE / BY THE LAFAYETTE SOCIETY, INC. / MRS. CLIFFORD C. DUELL PRESIDENT / APRIL 9, 1983
Dedication date: 4/9/1983
Materials & Techniques: Bronze, granite
Sponsor: The Lafayette Society, led by Martha Duell, raised funds from private donations.
Unveiling & Dedication: The monument was dedicated on the 200th anniversary of the naming of Fayetteville.
Subject notes: Gilbert du Motier, Marquis de La Fayette, served as a major-general under George Washington in the Continental army during the Revolutionary War. He later was a leader of the Garde nationale during the French Revolution. Fayetteville is the only city the Marquis actually visited that bears his name.
Landscape: The monument stands in Cross Creek park and is surrounded by a circle of greenery.
City: Fayetteville
County: Cumberland
Subjects: Revolutionary War
Latitude:
35.05382
Longitude:
-78.87665
Subjects:
Monuments
Places
Authors:
Commemorative Landscapes of North Carolina
Origin - location:
Cumberland County
Fayetteville
From:
Commemorative Landscapes of NC, University of North Carolina Chapel Hill.