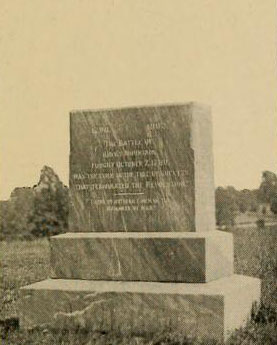 Description: This monument, made up of three slabs of granite placed atop one another, the topmost of which is inscribed, was dedicated to the victory at Kings Mountain. It was removed in 1937 due to it commemorating a different battle.

Cost: $Appears to have been donated by the National Marble Company

Unveiling & Dedication: Unveiled at the same time as the No North - No South Monument. The Oration was given by Col. W. A. Henderson of Tennessee on the topic of "Heroes of King's Mountain." The Gulf State Historical Magazine called it an unremarkable speech.

Former Locations: This monument was dedicated when the GBGC intended to make the site a"Mecca of Patriotism;" it was deemed inappropriate by the National Park Service and removed in 1937.

Landscape: It was placed in a row of monuments, most of which have been removed or are relocated.