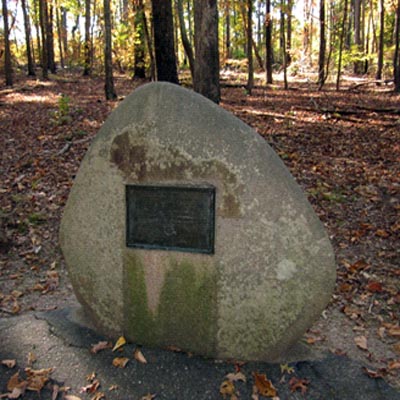 Kings Mountain Hoover Monument
Kings Mountain National Military Park, Blacksburg (SC)
View complete article and references at Commemorative Landscapes of North Carolina at: https://docsouth.unc.edu/commland/monument/449
Description: Erected on October 7, 1931, one year after the visit of President Herbert Hoover to the battlefield to commemorate the 150th anniversary of the battle, the Hoover Monument is a 5' x 1' x 4' elliptical piece of uncut granite with a 12" x 19" bronze plaque.
Inscription:
ON THIS SITE / PRESIDENT HOOVER / ADDRESSED AN AUDIENCE OF 75,000 / AT THE CELEBRATION OF THE / SESQUI CENTENNIAL / OF THE BATTLE OF KINGS MOUNTAIN / OCT. 7, 1930
Dedication date: 10/7/1931
Materials & Techniques: Granite base, bronze plaque
Sponsor: Daughters of the American Revolution Kings Mountain Chapter
Post dedication use: Members of the Kettle Creek chapter of the Daughters of the American Revolution and the Washington-Wilkes chapter of the Sons of the American Revolution participated in the October 7, 2010 observance of the anniversary of the battle.
Subject notes: The monument memorializes the location where then President Herbert Hoover gave an address at the 150th anniversary of the Battle of Kings Mountain. A crowd of several thousand people attended the October 7, 1930 event, with reports of between 30,000 and 70,000. In his speech, Hooever made reference to the significant effect the victory by a small band of backcountry patriots had on building morale in the revolutionary forces and in turning the tide for the American war effort: "This is a place of inspiring memories. Here less than a thousand men, inspired by the urge of freedom, defeated a superior force intrenched in this strategic position. This small band of patriots turned back a dangerous invasion well designed to separate and dismember the united Colonies. It was a little army and a little battle, but it was of mighty portent. History has done scant justice to its significance, which rightly should place it beside Lexington and Bunker Hill, Trenton and Yorktown, as one of the crucial engagements in our long struggle for independence."
Location: The monument is is located on the east end of the park on a wooded rise west of the Battlefield Ridge.
Landscape: The monument sits in a wooded site.
City: Blacksburg, SC
County: York (SC)
Subjects: Revolutionary War
Latitude:
35.14136
Longitude:
-81.38543
Subjects:
Monuments
Places
Authors:
Commemorative Landscapes of North Carolina
From:
Commemorative Landscapes of NC, University of North Carolina Chapel Hill.