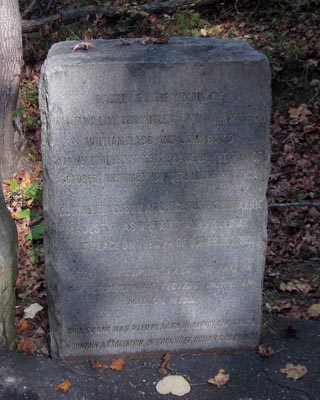 Description: This marker was erected as a replica of the weather-beaten 1815 Chronicle Marker. It was dedicated to the four patriot soldiers -- Major William Chronicle, Captain John Mattocks, William Raab, and John Boyd -- and the loyalist officer Colonel Patrick Ferguson and commemorated what was generally considered to be the location of their burial. This marker is a four foot tall stone in the style of a gravestone. It has a smooth front and rough cut sides and bears the inscription preserving the text of the 1815 Marker.

Subject notes: Sometime around 1910, with conflicting records indicating 1909 and 1914, the Kings Mountain Association of Yorkville, South Carolina erected this marker to preserve the record of the earlier 1815 marker erected by Dr. William McLean and to verify the burial ground of patriots Major William Chronicle, Captain John Mattocks, William Raab, and John Boyd, and loyalist Patrick Ferguson. The face of the soft slate of the 1815 Chronicle Marker had been worn by time and weather with the inscription being lost to erosion. The new marker was inscribed to preserve the inscription of the older 1815 Chronicle Marker sitting to its left.

Although the site was historically considered to be the burial place of the patriots and Loyalist Ferguson, an archaeological dig in the 1970s determined that no bodies lay below the earth under the marker.


Both the New and Old Chronicle Markers sit across the trail from the Chronicle Fell Monument.

Controversies: The National Park Service has noted conflicting dates regarding the marker's construction and dedication. The alternate date is 1909, around the same time the Centennial Monument was erected.

Location: The marker sits to the right of the 1815 Old Chronicle Marker and faces north towards the trail and across from the Chronicle Fell Monument.

Landscape: The marker sits beneath trees amidst the heavily forested terrain of the park.