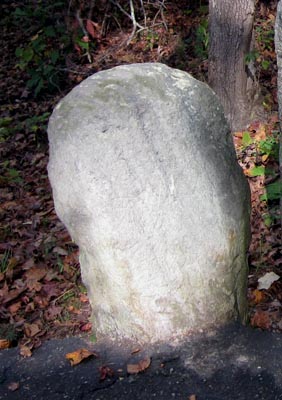 Description: This low, 3.5 foot tall thumb-shaped slate stone is a grave marker memorializing the presumed location of the deaths of patriots Major William Chronicle, Captain John Mattocks, William Raab, and John Boyd, and of Loyalist Major Patrick Ferguson. The face of the slate, originally inscribed with the commemoration, has been worn by time and weather with the inscription now eroded and illegible. Sometime around 1910, a companion monument, known as the New or 1914 Chronicle Marker, was raised immediately to the right of the marker to preserve its then eroding text.

Nickname: The Old Chronicle Monument or the Old Monument

SACRED TO THE MEMORY OF / MAJOR WILLIAM CHRONICLE CAPTAIN JOHN MATTOCKS /
WILLIAM RABB AND JOHN BOYD, / WHO WERE KILLED AT THIS PLACE ON THE 7th OF /
OCTOBER 1780 FIGHTING IN DEFENSE OF AMERICA. /

COLONEL FERGUSON, AN OFFICER OF HIS BRITANNIC / MAJESTY WAS DEFEATED AND KILLED AT
/ THIS PLACE ON THE 7th OF OCTOBER 1780.

Unveiling & Dedication: Dr. William McLean of Lincoln County, North Carolina erected this marker at his own expense on July 4, 1815.

Subject notes: Considered the earliest commemorative activity at Kings Mountain as well as the second oldest Revolutionary War monument in the country, this stone known as the Old Chronicle Marker was erected by Dr. William McLean to honor his fallen comrades Captain John Mattocks, William Rabb, John Boyd, and William Chronicle and to the memory of Major General Ferguson, an officer in the British army. McLean was a Revolutionary War veteran, having served under Major General Nathanael Greene. At the time McLean visited the site and dedicated the marker, he was running for Congress.


The Chronicle Marker was an attempt to verify the burial grounds of these individuals. However, an archaeological dig in the 1970s determined that no bodies lay below the earth under the marker. A second marker, the New or 1914 Chronicle Marker, was raised sometime around 1910, possibly 1909 or 1914, to preserve the wording on the original monument as the inscription on the original slate marker had deteriorated over time.

The 1815 and 1914 commemorations are part of a cluster of Chronicle markers at the military park and sit across the trail from the third marker in the cluster, the Chronicle Fell Monument.

Location: The weathered marker faces north towards the trail and to the left of the New or 1914 Chronicle Marker.

Landscape: The marker sits beneath trees amidst the heavily forested terrain of the park.