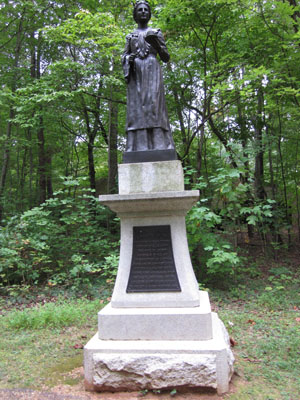 Description: Kerrenhappuch Norman Turner was the wife of James Turner, one of the early settlers of Maryland. Oral tradition indicates that upon news of her son's grave injury at the Guilford Courthouse, Kerrenhappuch rode on horseback to her wounded son's aid. She is said to have nursed him to health at Guilford Courthouse. This statue depicts her holding a cup of water and a towel as she nurses her son back to health.

Inscription:
1781 1902 / A HEROINE OF 76 / MRS. KERENHAPPUCH TURNER / MOTHER OF ELIZABETH / THE WIFE OF JOSEPH / MOREHEAD OF N.C. AND / GRANDMOTHER OF CAPTAIN / JAMES AND OF JOHN MOREHEAD / A YOUNG N.C. SOLDIER UNDER / GREENE, RODE HORSE-BACK FROM / HER MARYLAND HOME AND AT / GUILFORD COURTHOUSE NURSED / TO HEALTH A BADLY WOUNDED SON. / ERECTED BY / J. TURNER AND JOS. MOTLEY / MOREHEAD

Sponsor: James Turner Morehead and Joseph Motley Morehead, who were descendants of Turner, sponsored the monument. Joseph Motely Morehead was President of the Guilford Battleground Company at the time of the unveiling.

Unveiling & Dedication: An address by George S. Bradshaw, given at the dedication, can be read here.

Post dedication use: Joseph Morehead took great pride in having a monument to a woman, and later cited it as proof of the relevance of Guilford, writing "Besides we have here the first monument to a Revolutionary heroine erected in the United States. This has been denied to me by some, who, upon investigation had no more to say. There are groups of men and women, but this is to a woman."

Subject notes: Kerrenhappuch Turner was born in Virginia in 1690 and married James Turner in 1710. In 1733 they lived in Spottsylvania County, Virginia, and by 1790 she had moved to Montgomery County, North Carolina. She died in 1805 at the age of 108. Several of her descendants have served as Governors and Congressmen in Kentucky and North Carolina. This monument is said to be the first monument to a heroine of the Revolutionary War.

Controversies: A spoon was originally in her hand but consisted of a normal tinned iron spoon, electrocoated in copper and it soon began to corrode. The W H Mullins company promised to replace the spoon with a fully copper one free of charge in 1907 when it began to show signs of weathering. Today the hand is empty.

Landscape: The statue is in a row of monuments. It sits between the James Morehead and the Captain Gillis Monuments.