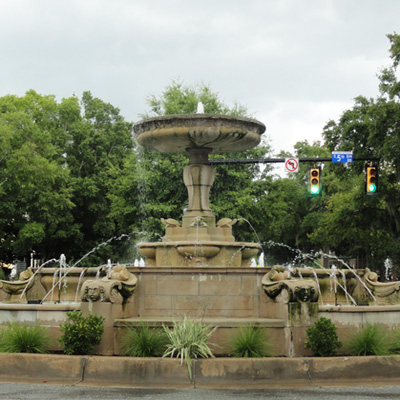 Description: The fountain, which is approximately fourteen feet high, was given by William R. Kenan, Jr. in 1921 in honor of his parents, Captain William R. Kenan, a Civil War veteran, and his wife, Mary Hargrave Kenan. It features a large central fountain composed of a bowl on a tall pedestal or stem sitting in a larger round basin. This entire structure rests atop a first tier which is divided into eight segments around the entire square structure. The center segment on the four sides forms a bench, and the fountain pools are located on either side on the corners. The water from the pool cascades into these basins, and carved fountainheads, in the shape of gargoyles and other classical figures, spray water into the center of the pool from the lower basins. Carved terrapins sit at the bottom of the central pedestal.


The fountain apparently became a traffic hazard, and in 1953 alterations were made to make it the center of a traffic circle in order to avoid further damage and improve traffic. Photographs prior to this date indicate that the fountain featured an additional tier at the base, with shallow steps at the center of the four sides leading to the benches. In 1953 commemorative plaques were added above the benches.

Inscription:
North Face: KENAN MEMORIAL FOUNTAIN /
ERECTED 1921 /
THROUGH THE MEDIUM OF THIS BRONZE TABLET, AUTHORIZED / BY WILMINGTON CITY COUNCIL AND PLACED IN 1953 A GRATEFUL / CITIZENRY EXPRESSES PROFOUND APPRECIATION FOR THE / ACTION OF MR. WILLIAM R. KENAN JR. IN PRESENTING TO HIS NATIVE CITY / THIS LOVELY FOUNTAIN. IT IS A BEAUTIFUL MEMORIAL, CONCEIVED / IN FILIAL GRATITUDE AND DEDICATED IN MEMORY OF HIS BELOVED / PARENTS, CAPTAIN WILLIAM R. KENAN (A GALLANT SOLDIER OF THE / CONFEDERACY), AND MARY HARGRAVE KENAN.


South Face: KENAN PLAZA /
CITIZENS, SOLDIERS, ENTREPRENEURS AND PHILANTHROPISTS - /
FOR MORE THAN 250 YEARS THE MEN AND WOMEN OF THE KENAN /
FAMILY HAVE SHARED THEIR LIVES AND FORTUNES WITH THE CITY /
OF WILMINGTON, FROM DEFENDING IT IN THE AMERICAN /
REVOLUTION TO CREATING AND PRESERVING ITS ECONOMIC, /
CULTURAL AND ARCHITECTURAL HERITAGE, THEIR RECORD OF /
COMMUNITY SERVICE IS ONE OF THAT WE, THE CITIZENS OF /
WILMINGTON, PROUDLY ACKNOWLEDGE IN DEDICATING THIS SPACE /
AS KENAN PLAZA. /
ERECTED BY THE COMMUNITY 20 OCTOBER 1992

Subject notes: William R. Kenan, Jr. had the fountain constructed as a gift to the City of Wilmington in memory of his parents, William Rand and Mary Hargrave Kenan. Born in Kenansville, the senior Kenan was a captain in the Civil War, originally enlisting in the Duplin Rifles of the North Carolina 43rd Regiment. After the war, he became a life insurance salesman in Wilmington. A prominent member of the Wilmington community, he became a trustee of the University of North Carolina in 1903. He died shortly after this appointment in 1903. His wife, Mary Hargrave, was a native of Chapel Hill.


William R. Kenan, Jr. engaged the prominent New York architectural firm of Carrere & Hastings to design and build the fountain, apparently paying $43,000 for its completion. John Carrere and Thomas Hastings studied at the Ecole des Beaux-Arts in Paris, and their collaboration included design of the New York Public Library.

Controversies: With the rise of automobile traffic after the 1920s, the streets that surround the fountain became much more crowded and members of the city council proposed removing it to widen the street. Its removal was debated, but after strong protests from the New Hanover Historical Commission, the city decided to shrink the fountain by removing the benches and lower pool around it in 1953. Since then, the fountain continues to be the focus of accidents and calls have continued for its relocation. In 2012, after renewed debate following a number of accidents, the Wilmington City Council approved $10,000 for additional lighting around the fountain in an effort to curb accidents and damage.

Location: The fountain is located in the center of the intersection of Market and 5th Streets.

Landscape: The fountain sits in the traffic circle with four lanes of traffic on both streets.