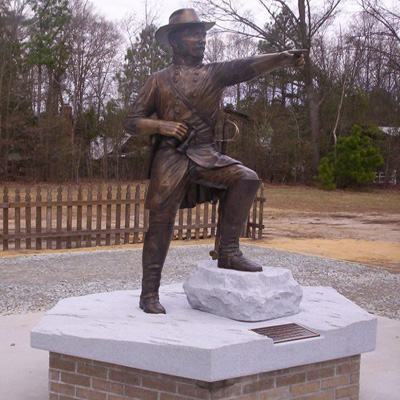 Description: The monument is a bronze statue of General Johnston atop a stone and brick base. The statue depicts a uniformed Johnston standing with one foot on a rock, pointing off into the distance. He has his binoculars in his hand and his sword at his side. The statue weighs approximately 400 pounds.

Inscription:
"DEFENDER OF THE SOUTHLAND TO THE END" / GENERAL JOSEPH EGGLESTON JOHNSTON / IN MEMORY AND HONOR OF THE CONFEDERATE SOLDIERS / WHO FOUGHT AT BENTONVILLE BATTLEFIELD, NORTH CAROLINA / DURING MARCH 19-21, 1865 / ERECTED BY SONS OF CONFEDERATE VETERANS / DEDICATED MARCH 20, 2010 / SCULPTOR: CARL W. REGUTTI

Subject notes: Joseph Johnston (1807 - 1891) served in the Mexican-American War and Seminole Wars in addition to being a senior general officer in the Confederate Army during the Civil War. Johnston's accomplishments in the Civil war include commanding the First Battle of Bull Run in 1861. He defended Confederate capital Richmond during the 1862 Peninsula Campaign. Johnston fought in both the Vicksburg and Atlanta Campaigns and in the last few months of the war commanded a small group of forces in the Carolinas Campaign. He was forced to surrender his armies to Sherman on April 26, 1865. Johnston became close friends with Sherman and Grant in the years following the war, during which he worked as an executive in the insurance and railroad businesses and later served as commissioner of railroads.

Controversies: In order to avoid controversy over the statue being placed on Bentonville Battlefield historic site due to Johnston's Confederate credentials, the Smithfield Light Infantry placed the statue on a private inholding land donated by an adjacent property owner.

Landscape: The statue is on private land next to the state run Bentonville Battlefield historic site. As of 2011 a planed brick "walk of honor" surrounding the monument remains unfinished. The bricks are inscribed with the names of donors.