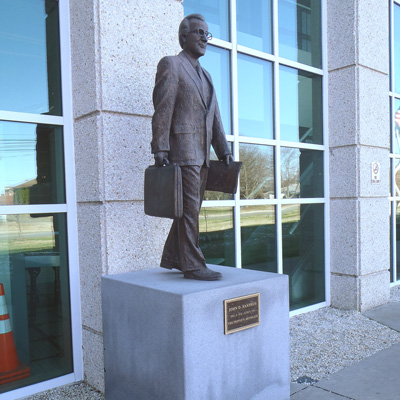 Description: Xanthos, a prominent Alamance County attorney and public defender, is depicted in bronze, confidently striding forward. Dressed in a suit and wearing glasses, the figure holds a briefcase in his right hand and a stack of papers in his left.

Subject notes: John D. Xanthos (1916-1991) was an attorney in Graham. He dedicated his life to serving the public in both his career and personal life. He began practicing law in 1946, shortly after returning to the United States as a WWII Veteran.

Location: The monument sits in front of the Alamance County Criminal Courts building on Elm Street.

Former Locations: The statue was originally located next to the U.S. Bicentennial Marker at the front entrance of the Alamance County Civil Courts Building, a block away on Elm Street. It was relocated sometime between 2010 and 2012.

Landscape: The statue sits on the walkway to the right of the front entrance to the building, inches from the exterior windows. The lawn and low plantings are adjacent to the walkway.