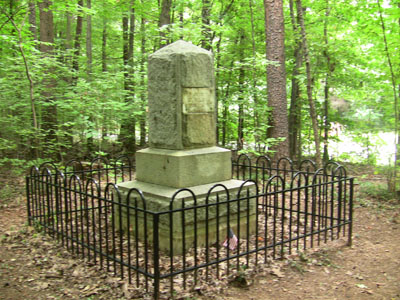 Description: The granite monument consists of a squat obelisk atop a square base. It measures 9 feet in height. It is inscribed on one of its four sides.

Subject notes: Capt. James Tate, born in Augusta County, Virginia, commanded a company of Virginia militia that supported Lt. Col. Henry "Lighthorse Harry" Lee's infantry. He was killed in the battle of Guilford Courthouse, and originally buried at the New Garden Friend's Meeting house, where he fell. In 1891 his remains were reinterred at their current site.

Former Locations: James Tate's remains were originally buried where he fell at the New Garden Friend's Meeting House before being relocated in 1891.

Landscape: The monument is located in the woods not far off from New Garden Road.