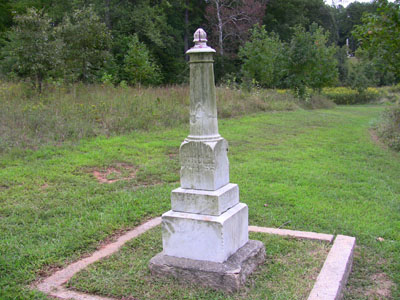 Description: This is the only monument at Guilford Battlefield that honors a British soldier. It honors James Stuart (or Stewart), who died here along the third line. It is a marble shaft placed on a granite base and stands nearly six feet tall.

Inscription:
East face: OF THE SECOND BAT- /
ALION OF THE QUEENS /
GUARDS, WAS KILLED /
AT THIS SPOT BY /
CAPTAIN JOHN SMITH /
OF THE FIRST MARY- /
LAND REGIMENT.

Subject notes: James Stuart was a colonel and commander of the Second Guards Battalion during the battle. He was engaged in a duel by Captain John Smith of the First Maryland but was supposedly killed by a bullet shot from a musket in the First Maryland. In 1866 a sword belonging to James Stuart was plowed up in the battlefield at the spot where this monument was erected. However, the location of the sword is unknown today.

Controversies: There is variation in the spelling of his last name and has been printed as both Stewart and Stuart.

Landscape: The monument is located off of Historic New Garden Road, near the Delaware and Maryland monuments.