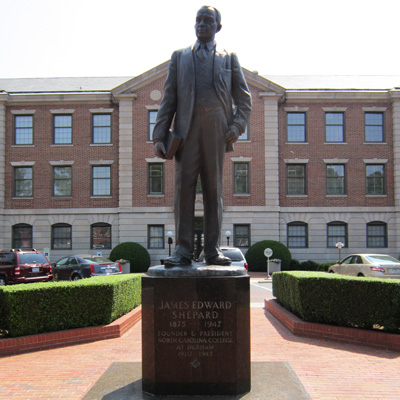 James Shepard Statue
North Carolina Central University, Durham
View complete article and references at Commemorative Landscapes of North Carolina at: https://docsouth.unc.edu/commland/monument/243
Description: The life-size bronze statue depicts Dr. James E. Shepard. He appears relaxed, with one hand grasping a book and the other resting on his pocket. He is dressed formally, as the president of a college. The polished granite base bears an inscription honoring Shepard, and a Masonic symbol appears etched in the granite beneath the inscription. A small plaque near the base of the statue honors the North Carolina Central University Class of 1998 for refurbishment of the monument.
Images: Panoramic View | Inscription
Inscription:
JAMES EDWARD / SHEPARD / 1875 - 1947 / FOUNDER & PRESIDENT / NORTH CAROLINA COLLEGE / AT DURHAM / 1910 - 1947
Dedication date: 6/1/1957
Creator: William Zorach, Sculptor
Materials & Techniques: Bronze, polished granite
Sponsor: The James E. Shepard Memorial Foundation, Inc. and the Prince Hall Grand Lodge Free and Accepted Masons of North Carolina
Cost: $20,000
Unveiling & Dedication: The unveiling took place at 4:00 pm in Duke Auditorium of the North Carolina College at Durham, now North Carolina Central University. Dr. Frank P. Graham, United Nations Mediator, was the principle speaker at the ceremony. Other speakers included Dr. Alfonso Elder, president of the college, Dr. C. D. Carnes of the Prince Hall Lodge of the Free and Accepted Masons of North Carolina, and Dr. Shepard's granddaughter, Mrs. Carolyn Smith Green, who formally unveiled the statue. James T. Taylor, the Executive Secretary of the Shepard Foundation, presented the statue to the college, and R. M. Gantt, Chairman of the college's board of trustees, accepted the statue on behalf of the school. The unveiling and subsequent exercises were open to the public.
Subject notes: Dr. James E. Shepard was born in Raleigh in 1875. He graduated from Shaw University in 1894 with a degree in pharmacy and worked as a pharmacist for a time. He was the founder and first president of what is today North Carolina Central University. The original school founded by Shepard was chartered in 1909 as the National Religious Training School and Chautauqua for the Colored Race in the Hayti section of Durham. In the 1920s, Shepard succeeded in obtaining state funding for the school, and in 1925 the school expanded to a four year curriculum and became known as North Carolina College for Negroes. It became the first public liberal arts school for African Americans. In the 1940s the name was again changed to the North Carolina College at Durham.
The statue was refurbished in the 1990s. In 2005 the statue was completely removed and transported to Cincinnati, Ohio for restoration. The university paid $14,000 for the restoration which involved removal of layers of patina and repair of the deteriorating interior of the statue. The process took six months, and the statue was re-installed in June, 2006.
Location: The statue sits facing Fayetteville Road in the traffic circle in front of the Hoey Administration Building at North Carolina Central University. The circle is at the end of Brant Street off Fayetteville Road.
Landscape: The statue sits in the center of a red brick circle and walkway. There are flowers planted, and the circle is surrounded by a low, manicured hedge.
City: Durham
County: Durham
Subjects: Historic African American Figures,Historic Educational Figures
Latitude:
35.97547
Longitude:
-78.90019
Subjects:
Monuments
Places
Authors:
Commemorative Landscapes of North Carolina
Origin - location:
Durham County
Durham
From:
Commemorative Landscapes of NC, University of North Carolina Chapel Hill.