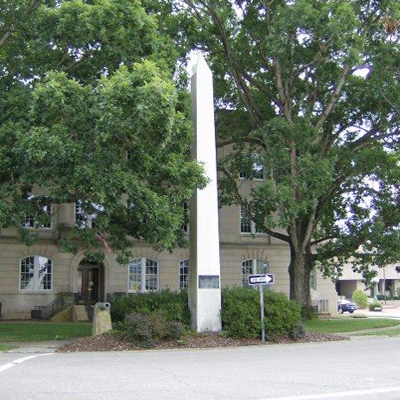 Description: The monument consists of a tall granite obelisk with two bronze plaques. The inscription on the front plaque honors McConnell's service with the French Army in World War I.


Front, obelisk: JAMES ROGERS MCCONNELL / A CITIZEN OF CARTHAGE / JOINED THE FRENCH ARMY / EARLY IN 1915 AND AFTER / TWO YEARS OF DISTINGUISHED / SERVICE FELL IN HEROIC / BATTLE WITH GERMAN / AEROPLANES ON MARCH 19, 1917. / HE FOUGHT FOR HUMANITY, LIBERTY / AND DEMOCRACY, LIGHTED THE WAY / FOR HIS COUNTRYMEN AND SHOWED / ALL MEN HOW TO DARE NOBLY / AND TO DIE GLORIOUSLY. / A FOUNDER OF THE LAFAYETTE ESCADRILLE


Rear, plaque: HE FOUGHT WITH ARDOUR, FOR HE / FOUGHT UNSTAINED, HE DIED WITH / GLORY, FOR HE DIED FOR TRUTH, / HE GAVE, UNRECKONING THE GAIN / OR LOSS, HIS HOPES, HIS DREAMS, / HIS PROMISE AND HIS YOUTH.

Unveiling & Dedication: The memorial to McConnell was said to be a "big event for the courthouse." The ceremony was held on Sunday afternoon April 1, 1917. More than 1,000 people came to show their respect for McConnell, and U.S. Spence, the mayor of Carthage at the time, presided over the ceremony. The Sandhills Quartet performed "Sleep on Brave Heart Forever", and eulogies were given by Mayor Spence, Governor Bickett, Governor Frank Lowden of Illinois, and French Ambassador M. Jusseraud. Letters from around the country were read. A comrade told the story of waiting for and finally hearing the news of his friend McConnell's death. A memorial was held in Paris, France on April 2, 1917, the following day.

Subject notes: Jacques MacConnell (James McConnell) was a citizen of Carthage, N.C. He was a pilot for the American Military who enlisted in the French Army in 1915 and flew in the Lafayette Escadrille. On March 19, 1917 he was killed over France during an air battle with German fighter planes. Today he is celebrated annually in Carthage on Memorial Day. He is also honored in Carthage by the Jacques McConnell Memorial.

Location: The monument sits in front of the historic Moore County Courthouse in Courthouse Square between the sidewalk and the traffic circle. It sits on the McReynolds Street side of the square.

Landscape: The monument sits in the lawn in front of the courthouse, surrounded by trees and shrubbery. There are two canon that sit on either side of the monument, both mounted on stone. They face away from the court house.