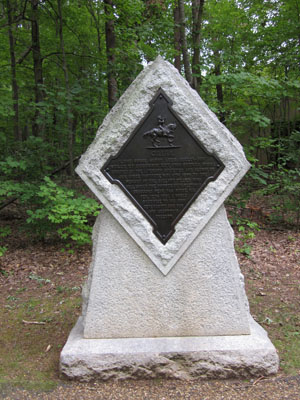 Description: A bas-relief of Gillies riding a horse and blowing his bugle is located above the inscription on this diamond-shaped stone monument .

Inscription:
GILLIES /
LIGHTHORSE HARRY LEE'S BUGLER-BOY /
DULCE ET DECORUM EST PRO PATRIA MORI"* /
ERECTED BY THE LITERARY /
SOCIETIES AND ALUMNI OF /
OAK RIDGE INSTITUTE MAY 6TH 1898 TO THE /
MEMORY OF THE GALLANT FILLIES WHO /
FELL UNDER THE SWORDS OF TARLETON'S /
DRAGOONS NEAR OAK RIDGE, N.C. /
FEB. 13TH 1781, A NOBLE /
SACRIFICE /
TO HIS OWN /
GENEROSITY AND FOR /
HIS COUNTRY'S /
FREEDOM. / *"SWEET AND FITTING IT IS TO DIE FOR ONE'S COUNTRY."

Subject notes: Gillies was a young soldier serving for 'Ã·Light-horse Harry' Lee's cavalry. He was killed in Guilford County by Tarleton's dragoons during a retreat prior to the battle of Guilford Courthouse on February 12, 1781.

Landscape: This particular monument is located in a row of similar structures that include the "No North-No South Monument, the Turner monument, and the Captain James Morehead (tent) monument.