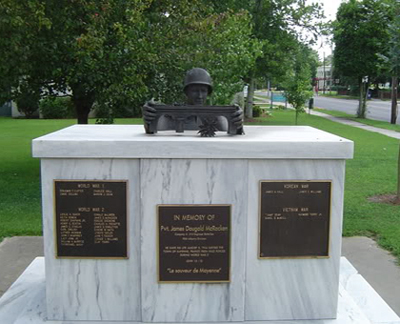 James Dougald McRacken War Memorial
Red Springs
View complete article and references at Commemorative Landscapes of North Carolina at: https://docsouth.unc.edu/commland/monument/430
Description: This monument pays tribute to James Dougald McRacken, known as the "Le sauveur de Mayenne [the savior of Mayenne]," for his heroism in World War II. McRacken was mortally wounded in a successful attempt to disarm explosives set by Germans to destroy one of the bridges at Mayenne, France. The monument is composed of a large, rectangular block of polished marble, approximately six feet long by four feet high, and a sculptural rendering of the soldier and bridge set in the top of the stone. The sculpture depicts the arms, shoulders, and head of Private McRacken, as if rising out of the marble, as his hands hold a miniaturized representation of the bridge. The front of the marble block contains three inscribed bronze plaques. The central plaque commemorates McRacken, and the left and right plaques contain commemorations of other soldiers from Red Springs fallen during World War I, World War II, the Korean War, and the Vietnam War.
Inscription:
Center plaque: IN MEMORY OF / Pvt. James Dougald McRacken / Company A 315 Engineer Battalion / 90th Infantry Division / He gave his life August 5, 1944 saving the Town of / Mayenne, France from Nazi forces during World War II / John 15:13 / "Le sauveur de Mayenne"
Right plaque:[The names of soldiers fallen in the Korean War and the Vietnam War are inscribed.]
Left plaque: [The names of soldiers fallen in World War I and World War II are inscribed.]
Dedication date: 8/5/1994
Creator: Paul Van Zandt, Sculptor
Materials & Techniques: Marble base and bronze sculpture and plaques
Sponsor: Citizens of Red Springs and Town of Red Springs
Unveiling & Dedication: The monument was dedicated during observance of the 50th anniversary of McRacken's heroic death at Mayenne, France.
Subject notes: The Monument is dedicated to the 90th Infantry Division hero James Dougald McRacken. However, it is a more inclusive war memorial as it also commemorates the service of other soldiers from Red Springs who have died in World War I, World War II, the Korean War, and the Vietnam War.
Private James Dougald McRacken died in attempt to save a bridge from being blown up by retreating Germans in Mayenne, France during the American advance in August of 1944. McRacken was wounded by a hand grenade explosion after leaving his truck or tank to disarm the explosives placed by the Germans. Despite being mortally wounded, he succeeded in cutting the wires and saving the bridge. Many townspeople witnessed his heroic effort and honored him shortly after with a monument placed near the bridge. He was subsequently buried close to the bridge. In 1948 his body was returned to his home town of Red Springs, and the citizens of Mayenne renamed the bridge in his honor.
The sculptor, Paul Van Zandt, is a retired emeritus professor of sculpture at the University of North Carolina at Pembroke.
Location: The monument is located in front of the Red Springs town hall on South Main Street. It sits on the right side of the walkway leading to the entrance with the front of the monument facing the walkway.
Landscape: The monument is located on a paved area in the lawn in front of the town hall.
City: Red Springs
County: Robeson
Subjects: Historic Military Figures,Korean War,Personal Monuments,Vietnam War,World War I,World War II
Latitude:
34.81442
Longitude:
-79.18275
Subjects:
Monuments
Places
Authors:
Commemorative Landscapes of North Carolina
Origin - location:
Robeson County
Red Springs
From:
Commemorative Landscapes of NC, University of North Carolina Chapel Hill.