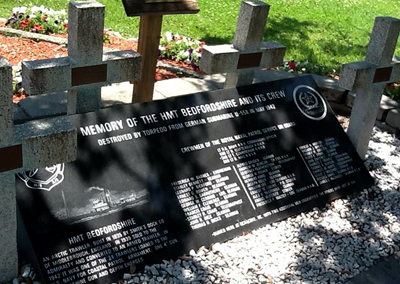 Description: The memorial consists of a low black granite commemorative plaque inscribed in honor of the British trawler the HMT Bedforshire and its crew who perished on May 11, 1942 when sunk by a torpedo from a German U-boat. The polished black granite is approximately 8 feet long by 3 feet tall, with the front face at an angle. The names of the lost sailors are inscribed, and the inscribed face is framed on the left by the insignia of the Royal Naval Patrol Service and on the right by the symbol of the Hyde County Heritage Trail. The British Cemetery Marker, commemorating the burial of the recovered sailors, sits several feet away next to the burial plot. The British flag flies over the site.

Inscription:
IN MEMORY OF THE HMT BEDFORDSHIRE AND ITS CREW DESTROYED BY TORPEDO FROM GERMAN SUBMARINE U-558 IN MAY 1942

*BURIED HERE AT OCRACOKE, NC, WITH TWO ADDITIONAL MEN UNIDENTIFIED, THE OTHERS WERE LOST AT SEA.

AN ARCTIC TRAWLER, BUILT IN 1935 BY SMITHS DOCK CO. OF MIDDLEBROUGH, ENGLAND. IN 1939 SOLD TO THE ADMIRALTY AND CONVERTED TO AN ARMED TRAWLER. IN 1942 IT WAS ONE OF THE 24 TRAWLERS LOANED TO THE U.S. NAVY FOR COASTAL PATROL. ARMAMENT: ONE 4" GUN, ONE MACHINE GUN AND DEPTH CHARGES."

Post dedication use: Every year on the Thursday and Friday closest to May 11th, a memorial service is held by the U.S. National Park Service, the U.S. Coast Guard, and members of the British Royal Navy.

Subject notes: In 1942, the British trawler, the HMT Bedfordshire, came to the United States as part
of the Allied effort during World War II. While patrolling the waters of the Outer Banks for German
Naval activity, the boat was torpedoed by a U-Boat on May 11, 1942, and all thirty-seven crewmen aboard were lost. Only four bodies were recovered. They were laid to rest on Ocracoke in a tiny plot considered the smallest Commonwealth War Graves Commission grave site in the world. Coast Guard service members buried the four recovered bodies in a plot gifted by an Ocracoke family, with the subsequent addition of a fence around the plot.

Landscape: The memorial sits within the cemetery landscape. It is situated in a garden area, surrounded by crushed stone and plantings, and next to a wooden boardwalk path. Small granite crosses sit directly behind the memorial. The fenced area with the graves of the four recovered sailors sits several feet from the memorial. The cemetery sits off the road, sheltered by trees, and historic homes are located nearby.