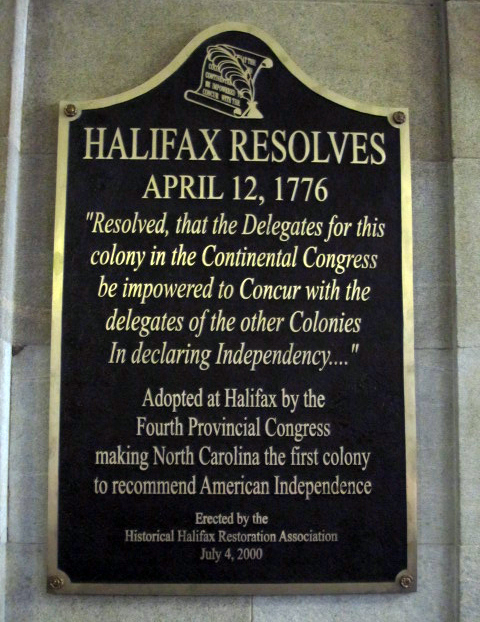 Description: This plaque sits on the wall in the first floor of the rotunda of the North Carolina State Capitol building in Raleigh. The plaque commemorates the resolution for a declaration of independence from Great Britain advanced by North Carolina's delegation at the Fourth Provincial Congress at Halifax, North Carolina on April 12, 1776. The plaque is approximately three feet tall by two feet wide, with a single scallop rising on the top edge. An engraving of the declaration in the shape of a scroll along with a feather quill pen is shown in the scallop.

Inscription:
HALIFAX RESOLVES / APRIL 12, 1776 / "Resolved, that the Delegates for this / colony in the Continental Congress / be impowered to Concur with the / delegates of the other Colonies / In declaring Independency...." / Adopted at Halifax by the / Fourth Provincial Congress / making North Carolina the first colony / to recommend American Independence / Erected by the / Historical Halifax Restoration Association / July 4, 2000

Subject notes: Prior to April of 1776, North Carolina was undecided on the issue of independence. However, at the Fourth Provincial Congress at Halifax beginning April 4, 1776, and following close on the heels of the Battle of Moores Creek Bridge, members of North Carolina's delegation sitting on the committee considering violations committed by the King resolved forcefully for declaration of independence from Great Britain. Known as the Halifax Resolves, the resolutions adopted by the Provincial Congress quickly made their way to Joseph Hewes, a North Carolina delegation member in Philadelphia, and helped pave the way for the Declaration of Independence of July 4, 1776.

Location: The plaque is located in the rotunda of the North Carolina State Capitol building on West Morgan Street.