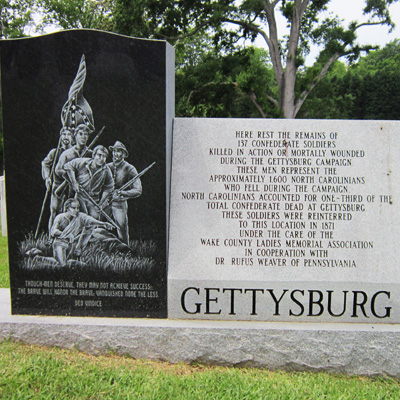 Gettysburg Memorial
Oakwood Cemetery, Raleigh
View complete article and references at Commemorative Landscapes of North Carolina at: https://docsouth.unc.edu/commland/monument/156
Description: The monument is composed of two rectangular granite stones which stand upright on a horizontal granite base. The stone on the left has a dark polished surface with an engraving of a picture of five Confederate soldiers in battle, with a wounded soldier kneeling in front of the others and pointing toward something. The soldier in the rear carries the Confederate Flag, waving above the soldiers' heads. The Latin motto from the Great Seal of the Confederacy appears in the inscription - "Deo Vindice" - and is translated as "God Will Vindicate." The shorter, light granite stone on the right bears an inscription commemorating those who died at Gettysburg. It also commemorates Dr. Rufus Weaver who was in charge of removing and organizing the remains the dead at Gettysburg. A version of the Great Seal of the Confederacy is inscribed on the rear of the shorter stone, with a wreath, the initials "CSA" ("Confederate States of America") and the Latin motto.
Inscription:
Front, stone on right: HERE REST THE REMAINS OF / 137 CONFEDERATE SOLDIERS / KILLED IN ACTION OR MORTALLY WOUNDED / DURING THE GETTYSBURG CAMPAIGN. / THESE MEN REPRESENT THE / APPROXIMATELY 1,600 NORTH CAROLINIANS / WHO FELL DURING THE CAMPAIGN. / NORTH CAROLINIANS ACCOUNTED FOR ONE-THIRD OF THE / TOTAL CONFEDERATE DEAD AT GETTYSBURG. / THESE SOLDIERS WERE REINTERRED / TO THIS LOCATION IN 1871 / UNDER THE CARE OF THE / WAKE COUNTY LADIES MEMORIAL ASSOCIATION / IN COOPERATION WITH / DR. RUFUS WEAVER OF PENNSYLVANIA. / GETTYSBURG Front, stone on left: THOUGH MEN DESERVE, THEY MAY NOT ACHIEVE SUCCESS: / THE BRAVE WILL HONOR THE BRAVE, VANQUISHED NONE THE LESS. / DEO VINDICE Rear: CSA / DEO VINDICE
Dedication date: 5/4/1997
Materials & Techniques: Granite
Sponsor: Sons of Confederate Veterans, North Carolina Chapter
Unveiling & Dedication: A dedication was planned for May 4, 1997 at Oakwood Cemetery in the Confederate section. Michael Taylor of Albemarle, N.C. was scheduled as the guest speaker. Planting of a tree seeded from an oak tree on Seminary Ridge in Gettysburg was planned.
Subject notes: The Battle of Gettysburg was fought on July 1-3, 1853. Seminary Ridge was the site of fighting on July 1, 1863.
Location: The monument is located on the slope above the House of Memory in the Confederate section of Oakwood Cemetery. The back side of the monument faces the House of Memory.
Landscape: The monument is located amidst individual grave markers in the Confederate section of Oakwood Cemtery, on the slope above the House of Memory. The landscape is grassy with trees in the background near the House of Memory.
City: Raleigh
County: Wake
Subjects: Civil War
Latitude:
35.78493
Longitude:
-78.62712
Subjects:
Monuments
Places
Authors:
Commemorative Landscapes of North Carolina
Origin - location:
Wake County
Raleigh
From:
Commemorative Landscapes of NC, University of North Carolina Chapel Hill.