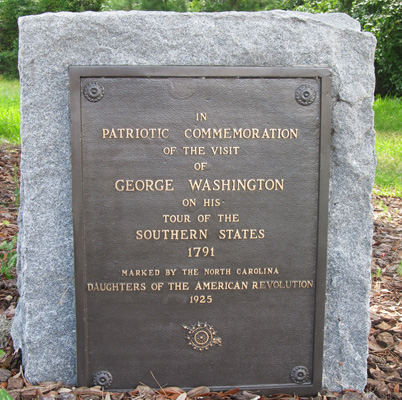 Description: A bronze plaque on a small, rough-cut stone stele commemorates President George Washington's visit to the area on his tour of the southern states in 1791.

Inscription:
IN / PATRIOTIC COMMEMORATION / OF THE VISIT / OF / GEORGE WASHINGTON / ON HIS / TOUR OF THE / SOUTHERN STATES / 1791 / MARKED BY THE NORTH CAROLINA / DAUGHTERS OF THE AMERICAN REVOLUTION / 1925

Subject notes: Shortly after Washington was elected President in 1789, he decided to tour the United States in order to better understand the condition of the country, its makeup and culture, and to give the citizens of the young republic a chance to meet their first President. The duties of office delayed a trip to the South until the spring of 1791. His larger than life status made his visits important events for communities and the places he stayed became historically significant. Washington apparently stopped somewhere nearby along the same old route, then called the Kings Highway, when traveling toward Wilmington to have his lunch beneath a tree and where he was met by an escort party. The original site of the marker was believed to be the tree where Washington stopped to eat his lunch, and according to an account of the 2011 event, local lore had it that Hampstead got its name when President Washington asked for ham for lunch instead of sausage.

Location: The marker is located on the west side of U.S. Highway 17, near Hampstead, in Pender County.

Landscape: The marker sits just off the side of the road and is shaded by a large, old oak tree.