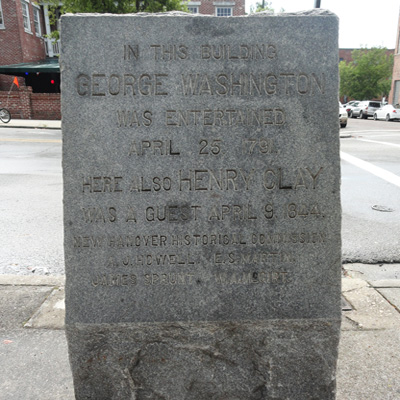 Description: The marker is a simple stone slab, approximately two feet tall with an angled front face. It features an inscription commemorating the location of lodging during during the visits to Wilmington of President George Washington in 1791 and Henry Clay in 1844. It is very similar to the other markers placed by the New Hanover Historical Commission at a number of historical sites in Wilmington. The names are given emphasis by their engraving in a significantly larger font than the rest of the text. The inscription also includes the sponsoring members of the New Hanover County Historical Commission.

Dedication date: The monument was installed likely sometime in the 1910s or 1920s.

Subject notes: Following his election as President in 1789, Washington resolved to tour the United States to better understand the makeup and culture of the nation. He visited many small communities across the country, and his larger-than-life status made his visits important events for communities and the places he stayed historically significant.


In Wilmington, President Washington was received by a welcome party and a 45-gun salute. He stayed at the home of Mrs. John Quince, which was located very near the location of the marker. The original residence planned for the President's lodging became unavailable, and apparently Mrs. Quince graciously offered her home to the President at the last minute. During the evening, Washington was treated to a military parade throughout a town illuminated in his honor. And a ball was given in his honor at the Assembly Hall.


Henry Clay made a presidential campaign stop in Wilmington in April 1844. James Sprunt reported that he arrived on a steamer to be greeted by a large crowd and was then escorted to his lodging at the home of Mrs. Joseph A. Hill on the southeast corner of Front and Dock Streets. He was then escorted to the Potter Mansion on Market street where he gave a speech from the balcony. That evening a ball was given in his honor at the Carolina Hotel and Masonic Hall, and the next morning he left by train for Raleigh.


Little appears to be known about the activities of the New Hanover County Historical Commission and their installation of similar small stone markers commemorating historical locations throughout Wilmington.

Landscape: It sits on the sidewalk a few feet from the curb, flanked on one side by a fire hydrant and on the other by a municipal waste receptacle. Shops and restaurants are located on either side of the street nearby.