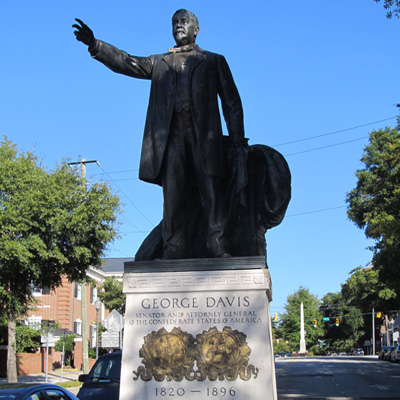 Description: This bronze 8-foot tall cast sculpture of George Davis stands atop a granite base. Davis, Confederate Senator and Attorney General from 1820-1896, stands upright and raises his right hand in the air while resting his left hand atop a decorated pedestal. The base, weighing five and a half tons, features gilded seals of both North Carolina and the Confederate states.


East face: HIS WISDOM ILLUSTRATED THE / PRINCIPLES OF LAW AND EQUITY. / HIS ELOQUENCE COMMANDED / THE ADMIRATION OF HIS PEERS. / BELOVED FOR HIS STAINLESS / INTEGRITY, HIS MEMORY DWELLS / IN THE HEARTS OF HIS PEOPLE. / SHINING IN THE PURE EXCELLENCE / OF VIRTUE AND REFINEMENT, / HE EXEMPLIFIED, WITH DIGNITY / AND SIMPLICITY, WITH GENTLE / COURTESY AND CHRISTIAN FAITH, / THE TRUE HEART OF CHIVALRY / IN SOUTHERN MANHOOD.


North face: ERECTED / IN LOVING MEMORY / BY / THE UNITED DAUGHTERS / OF THE CONFEDERACY

Sponsor: The United Daughters of the Confederacy (Cape Fear Chapter 3)

Unveiling & Dedication: The statue of George Davis was unveiled on April 20, 1911 by four of the man's grandsons: M.F. H. Gouverneur, Jr., Donald McRae, Jr., George Rountree, and Robert Cowan Davis. Henry G. Connor, Judge of the United States Court for the Eastern District of North Carolina, delivered the dedication speech, which can be read here. The Delgado Band was hired for twenty-five dollars to provide musical accompaniment to the dedication ceremony.

Post dedication use: George Davis' birthday was celebrated at the monument in 1993 by the Sons of Confederate Veterans. Davis was again honored two years later by his descendents in a monument ceremony. In 2000, traffic damage to the monument led to its repair and reinstallation.

Subject notes: George Davis was born in 1820 in Wilmington, NC and later attended the University of North Carolina, where he was valedictorian. He studied law and served in the Confederate army as a delegate. Jefferson Davis elected him Attorney General in 1864, a position in which he served until the end of the war. He was captured and imprisoned by the US army in 1865 but was pardoned. Davis returned to Wilmington in 1866 and lived there until his death on February 23, 1896.

Location: This monument sits in the median at the intersection of Market Street (US 17) and North 3rd Street.