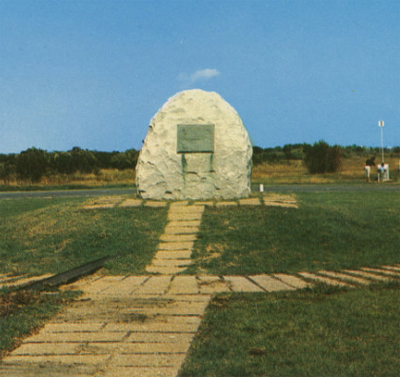 Nickname: The First Successful Flight of an Airplane

Inscription:
THE FIRST SUCCESSFUL FLIGHT OF AN AIRPLANE WAS MADE FROM THIS SPOT BY ORVILLE WRIGHT DECEMBER 17, 1903 IN A MACHINE DESIGNED AND BUILT BY WILBUR AND ORVILLE WRIGHT.

Unveiling & Dedication: Friends and family of the Wrights, 200 delegates from the International Civil Aeronautics Conference, and over 3,000 visitors dedicated this marker at the approximate site of the 1903 liftoff. The ceremony also included the laying of the cornerstone atop Kill Devil Hill for the Wright Memorial.

Post dedication use: On December 17, 2003, the centennial of the first flight, a ceremony was hosted by John Travolta and attended by President George W. Bush, Neil Armstrong, and Buzz Aldrin.

Subject notes: Orville Wright made the first flight in an airplane on December 17, 1903.

Controversies: The exact location of the first flight was debated because the dunes had shifted over time. Using accounts of the flight and surviving witnesses the location was determined. The title of first in flight has been contested by other individuals, particularly Glenn Curtiss in the United States, as well as Alberto Santos-Dumont in France.

Location: The monument is located from the intersection of Croatan Highway and Prospect Avenue atop Kill Devil Hill. Busts of Wilbur and Orville Wright flank the monument. It is located north of the Wright Brothers Monument.

Landscape: The monument is located in the Wright Brothers National Memorial Park. In 1960 a visitors center and parking lot were built east of the marker.