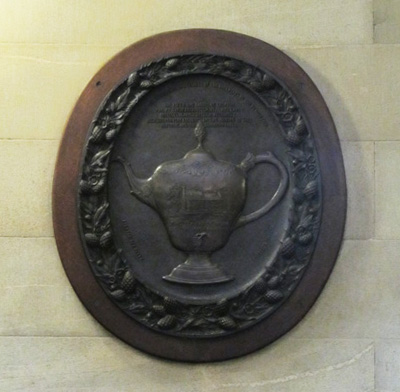 Description: This plaque, which is located in the Capitol rotunda in Raleigh, bears a relief carving of an ornate tea kettle surrounded by both inscriptions and a wreath of pine. An image of a colonial house surrounded by trees is carved into the kettle.

Inscription:
ERECTED BY THE NORTH CAROLINA SOCIETY OF THE DAUGHTERS OF THE AMERICAN REVOLUTION


TO/ THE FIFTY-ONE LASTIES OF EDENTON, / WHO, BY THEIR PATRIOTISM, ZEAL AND EARLY / PROTESTS AGAINST BRITISH AUTHORITY, / ASSISTED OUT FORE FATHERS IN THE MAKING OF THIS / REPUBLIC AND OUR COMMONWEALTH.

Sponsor: Daughters of the American Revolution

Unveiling & Dedication: When the plaque was unveiled, prayer was given by the Rev. Robert Brent Drane, addresses by Patrick Matthew, Lieutenant-Governor of North Carolina Francis Winston, Chief Justice of the Supreme Court of North Carolina Walter Clark, and a benediction by Benjamin F. Dixon. Mrs. E. E. Moffitt presented the plaque to Lt. Governor Winston, who accepted on behalf of the state.

Subject notes: In October of 1774, fifty-one women in Edenton North Carolina signed a pact in which they agreed to avoid buying British tea and clothing as a sign of resistance to the 1773 Tea Act.
The full text of the petition to the British monarchy read, "As we cannot be indifferent on any occasion that appears nearly to affect the peace and happiness of our country, and as it has been thought necessary, for the public good, to enter into several particular resolves by a meeting of Members deputed from the whole Province, it is a duty which we owe, not only to our near and dear connections who have concurred in them, but to ourselves who are essentially interested in their welfare, to do every thing as far as lies in our power to testify our sincere adherence to the same; and we do therefore accordingly subscribe this paper, as a witness of our fixed intention and solemn determination to do so."


The event was satirized by the English press but was lauded in the colonies. Like the Battle of Alamance, North Carolina residents during the 19th and early 20th century utilized the Edenton Tea party to present the roots of the revolution as beginning in the South instead of in New England.

Controversies: The plan to put the names of all the signers on the plaque was nixed when it became clear there was no definitive list of who had participated, as the original text of the petition has been lost.

Landscape: The plaque is situated in the Rotunda of the North Carolina Capitol Building.