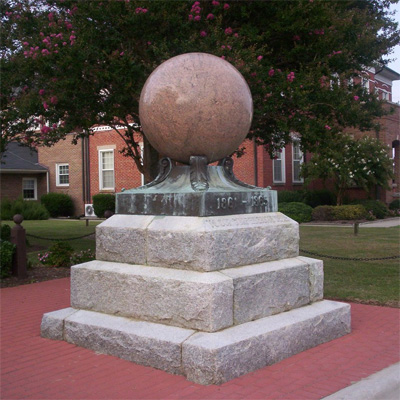 Description: In contrast to the more typical Confederate monument in North Carolina depicting the Confederate Common Soldier, this monument presents the simplicity of a large polished sphere of pink granite. This simple, graceful orb is mounted on a copper setting of scrolled acanthus leaves. The entire structure rests on a three-tier granite base.


On the granite base: TO OUR CONFEDERATE DEAD

Unveiling & Dedication: The monument was installed and dedicated in two separate events separated by more than ten years. The installation and dedication of the cornerstone was planned for Wednesday, September 18, 1912 in conjunction with the local annual reunion of the H. M. Shaw Camp of Confederate veterans. A newspaper account of the planned activities reported that the festivities included an invitation for the D. H. Hill Chapter of the United Daughters of the Confederacy to be present along with appropriate services, speeches, and exercises. A "basket picnic" was planned for the courthouse grounds, along with music and an address by Herbert Peele of Currituck. Additional speeches were to be given by Attorney A. M. Simmons, the Rev. A. A. Crater, and Dr. Julian D. Maynard to the glory of the monument, the South, and the bravey of Currituck County.


The monument was completed in 1923 with the installation of the granite sphere.

Subject notes: The finished monument is most likely not what the local people and the Confederate Veterans had originally intended, with it appearing that fundraising for the original monument stalled after the installation of the granite base by veterans and Captain J. B. Lee. Around 1923, Joseph Palmer Knapp, the New York publisher, offered to pay for the completion of the monument with the installation of the granite sphere. An editorial published in The Elizabeth City Independent around that time suggested that the offer of a Northerner and northern money to complete the monument was a disgrace to local patriotism and Confederate heritage. Knapp was a philanthropist whose philanthropy included donation of money toward the island's schools and the founding of the conservation organization Duck's Unlimited. He had a home on Mackay Island, just to the north of Currituck Island.

Controversies: An editorial published in The Elizabeth City Independent around that time suggested that the offer of a Northerner and northern money to complete the monument was a disgrace to local patriotism and Confederate heritage.

Location: The monument is located off Courthouse Road in Currituck and within the historical and contemporary Currituck County administrative complex.

Landscape: The monument is located just off the road on a brick walkway. It sits in front of the historic Currituck County Jail.