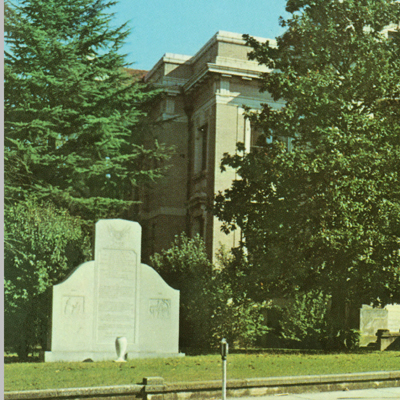 Inscription:
Front: 1861-1865 / THE CONFEDERATE FLAG
NOT LONG UNFURLED WAS I KNOWN, /
FOR FATE WAS AGAINST ME / BUT I FLASHED OVER A PURE CAUSE. / AND, ON LAND AND SEA, / SO FIRED THE HEARTS OF MEN UNTO HEROISM / THAT THE WORLD HONORS ME. / WITHIN MY FOLDS, THE DEAD, WHO DIED UNDER THEM, /
LIE NOBLY SHROUDED; / AND MY TATTERED COLORS, / CROWDED WITH A THOUSAND SHINING VICTORIES / HAVE BECOME,
FOR THE PEOPLE WHO LOVED ME, / A GLORIFIED MEMORY / JOHN DIMITRY


TO THE WOMEN OF THE CONFEDERACY / WHO, IN UTTER DEVOTION TO THE CAUSE, / HELPED TO SEND TO THE FRONT MORE THAN / SIX HUNDRED THOUSAND SOLDIERS IN ONE OF / THE GREATEST AND MOST UNEQUAL CONFLICTS RECORDED IN HISTORY.


THESE WOMEN, WITH HOPE AND / COURAGE THAT NEVER FALTERED, INSPIRED / OUR CITIZEN SOLDIERY BY THEIR FAITH / IN GOD, BY THEIR MAGIC INFLUENCE AND / IMMEASURABLE GOOD WORKS.


THEIR FAIR DAUGHTERS, / WITH UNSHAKEN FIDELITY, HAVE PRESERVED / THE FAME OF OUR GLORIOUS DEAD.


WITH SUCH TO INSPIRE THE LIVING / AND HONOR THE FALLEN, THE MEN OF THE SOUTH / WILL EVER BE EQUAL / TO VICTORY / SUPERIOR TO DEFEAT


Rear: DEDICATED 1934 / THIS MEMORIAL IS A GIFT OF LOVE TO HIS MOTHER ELIZA SNYDOR NELME SMITH AND TO MARY BENNETT SMITH AND / NANNIE FLAKE SMITH FROM WILLIAM ALEXANDER SMITH OF THE ANSON GUARDS, FIRST COMPANY IN THE STATE TO / OFFER ITS SERVICES, LATER ENROLLED, AND FOUGHT GALLANTLY THROUGHOUT THE WAR, AS COMPANY C FOURTEENTH / NORTH CAROLINA REGIMENT, CONFEDERATE STATES ARMY. / FIDELIS

Unveiling & Dedication: On a hot Saturday morning, thousands gathered at the Anson County Courthouse for the dedication of the monument. Many state-wide notables of the United Daughters of the Confederacy (U.D.C.) were in attendance along with members of the Daughters of the American Revolution and several African American citizens, whom the local newspaper account reported as a "body servants of famous people of the Confederacy". The United States Army was represented by Brigadier General Manus McClosky of Fort Bragg.


An "Old South" atmosphere was present throughout the proceedings with Confederate flags scattered about the grounds and young women and U.D.C. members dressed in costumes of the Old South. Mrs. Mary Bennett Little, 27-year president of the Wadesboro chapter of the U.D.C., served as mistress of the ceremony. Following the reading of the inscription by a Mr. Marshall of the Frank Bennett Chapter, Children of the Confederacy performed a musical number entitled "The Homespun Dress." Brigadier General Manus McClosky delivered a short speech, and the salute of the Flag followed. The band played the Star Spangled Banner, and the original flag of the Anson county guards was held aloft during the ceremony. A granite vase was presented by Mr. Scoggins of Scoggins Memorial Art Shops.

Subject notes: This monument was built to recognize the efforts of Confederate women during the Civil War. The funding for the monument was left in the will of General W.A. Smith. The United Daughters of the Confederacy first organized in 1894 as the National Association of the Daughters of the Confederacy. They provided material and educational support for Civil War veterans, their families and descendants, collected historical materials, and commemorated the memory of soldiers by organizing annual ceremonies and erecting local monuments.