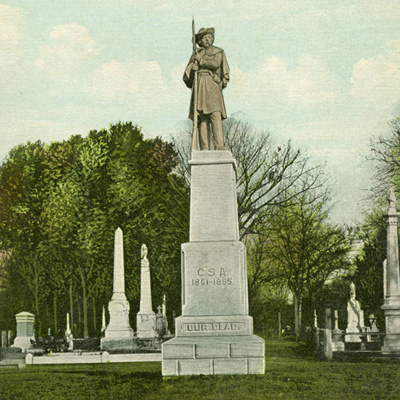 Confederate Monument
Cedar Grove Cemetery, New Bern
View complete article and references at Commemorative Landscapes of North Carolina at: https://docsouth.unc.edu/commland/monument/228
Description: The monument rises to approximately eighteen feet on a four foot square base and depicts a Confederate common soldier, cast in bronze, standing at parade rest with his rifle. He is represented in a ready and watchful pose, with a single cannon ball resting by his right foot. He wears a classic soldier's uniform with his canteen and sword slung at his side and a cloak over his shoulders. The life-size sculpture rests atop a tall, tapered granite column.
The Latin inscription on the front face, "Dulce Et Decorum Est Pro Patria Mori," is translated as "It is sweet and fitting to die for one's country" and originates from the Odes of the Roman lyrical poet Horace.
Images: Vintage Postcard Image | Vintage Postcard Image
Inscription:
Front: C.S.A. / 1861-1865 / DULCE ET DECORUM EST / PRO PATRIA MORI. / OUR DEAD.
Rear: ERECTED BY THE / LADIES MEMORIAL ASSOCIATION / OF NEWBERN / MAY 10, 1885.
Side: "Tread lightly - for these men bequeathed, / Ere laid beneath this sod, / Their ashes to their native land, / Their souls unto their God."
Dedication date: May 11, 1885
Materials & Techniques: Rutland blue marble and bronze
Sponsor: The Ladies' Memorial Society of New Bern
Cost: $3700
Unveiling & Dedication: According to the account of the event by the Ladies' Memorial Society, a throng assembled coming by steamer and railroad from surrounding towns. A speakers' stand was decorated at the site, and old veterans were present along with the old, worn flag of the Forty-eighth North Carolina Regiment. Music was provided by a choir, and a prayer was given by the Rev. V. W. Shields. Captain Hamilton C. Graham of Dallas County, Alabama, a former captain of the Seventh North Carolina Regiment, delivered the memorial address on the subject of the service of General James Johnston Pettigrew.
Subject notes: The Battle of New Bern was fought on March 14, 1862, with Brigadier General Ambrose E. Burnside leading the Union attack on the Confederates under General Lawrence O'B. Branch. The Union forces took command of the city which remained under Union control for the rest of the war. The monument sits above a vault where approximately 67 Confederate soldiers are interred who were killed during the war. The Ladies' Memorial Society reported that the statue was created in Carrera, Italy.
Location: The monument sits in Cedar Grove Cemetery off George Street in New Bern.
Landscape: The monument sits in a grass circle near the center of the cemetery. It is surrounded by a gravel walkway and other grave markers. Low shrubs and mature trees are found throughout the cemetery.
City: New Bern
County: Craven
Subjects: Civil War
Latitude:
35.11208
Longitude:
-77.04346
Subjects:
Monuments
Places
Authors:
Commemorative Landscapes of North Carolina
Origin - location:
Craven County
New Bern
From:
Commemorative Landscapes of NC, University of North Carolina Chapel Hill.

I am asking for permission to

I am asking for permission to copy the context of this article. This confederate monument and memorial are in question. I would like to use the history of the memorial in a letter to the editor of the Sun Journal in response to an antagonist’s recent letter.
I would of course use your credits.
Please consider and respond to my request.
Thank you,
Candy Rozo