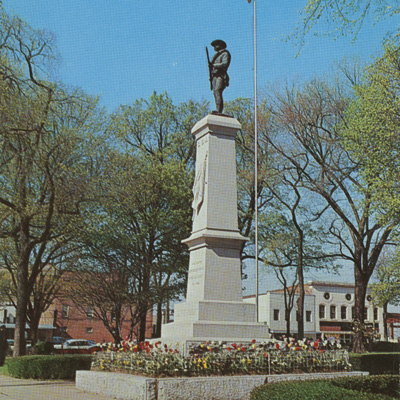 Cleveland County Confederate Monument
Shelby
View complete article and references at Commemorative Landscapes of North Carolina at: https://docsouth.unc.edu/commland/monument/257
Description: Standing over twenty feet tall, the monument consists of a bronze statue of the Confederate Private Soldier as he faces north, alert and ready with his rifle in his hands. A draped Confederate flag is shown in bas-relief on the tall, taperd column, with the initials of the Confederate States of America -- "C.S.A." -- in raised lettering above the flag. The column is a massive piece of granite, with individual sections weighing reportedly eight to twelve thousand pounds. The column rests atop a large piece of granite, reportedly weighing itself upwards of eighteen thousand pounds, with the entire structure resting on a base of crushed rock and cement.
Image: Postcard image of Courthouse Square and the Confederate Monument
Inscription:
Front, column: C.S.A. / IN HONOR OF THE / CONFEDERATE HEROES / OF CLEVELAND COUNTY / 1861-1865 / LEST WE FORGET
Front, base: American Bronze Co., Chicago
Rear: ERECTED BY: THE UNITED DAUGHTERS OF THE CONFEDERACY NOV. 21 1906
Rear, plaque on base: Restored by / the Cleveland County Guards / Chapter #443 / of the United Daughters / of the Confederacy / September 15, 1991
Dedication date: 5/10/1907
Creator: Marble and Granite Works, Builder Charles M. Walsh, Builder American Bronze Company, Foundry
Materials & Techniques: Bronze, granite, concrete, crushed rock
Sponsor: United Daughters of the Confederacy, Cleveland Guards Chapter 443
Cost: $2550
Unveiling & Dedication: The monument was erected on the site in front of the Cleveland County Courthouse in November 1906. The dedication took place with exercises on May 10, 1907.
Subject notes: Despite the general reluctance of the citizens of North Carolina to endorse secession and the Confederacy, Cleveland County residents strongly supported the Confederate war effort and sent many men to the war along with neighboring Gaston County. Following the war, there was strong support for the memory of the Confederacy and its meaning for the South, and Cleveland County became the home of an active chapter of the Ku Klux Klan between 1868 and 1872. After Lee's surrender at Appomattox, Federal troops occupied the Courthouse Square in Shelby, staying until 1872 in an attempt to suppress the Klan. In 1906, the erection of the monument in front of the courthouse became an official memorialization of the Confederacy and an official reclamation of territory in its name.
According to a newspaper account of the monument's construction, the base of the monument was so massive that ten mules were needed to pull it on a wagon from the Southern Rail station to the Courthouse. In 1991 the United Daughters of the Confederacy sponsored the restoration of the sculpture by Karkadoulias Bronze Art of Cincinnati, OH.
Location: The monument sits in front of the Old Cleveland County Courthouse in Shelby, at the intersection of South Lafayette and West Dale Streets. The Old Courthouse is now home to the Cleveland County Historical Museum.
Landscape: The monument sits in the middle of the sidewalk directly in front of the entrance to the Courthouse. The area is surrounded by a lawn, mature shade trees, flowering shrubs, and seasonal plantings.
City: Shelby
County: Cleveland
Subjects: Civil War
Latitude:
35.29139
Longitude:
-81.54022
Subjects:
Monuments
Places
Authors:
Commemorative Landscapes of North Carolina
Origin - location:
Cleveland County
Shelby
From:
Commemorative Landscapes of NC, University of North Carolina Chapel Hill.

Legislation to help put a

Legislation to help put a stop to the lawless destruction of the history of our land has been slow in coming but hope is on the horizion. Having been born and raised in Cleveland County and still residing there today, I can attest that the soldier on the square has never uttered a word about slavery, terrorism or any of the things that he is accused of representing. It is but a place to remember war dead. This same area has memorials dedicated to those lost in WWI, WWII and Vietnam.
I often visit and sit nearby just trying to imagine what kind of person would want to see the desecration of a memorial to all those who fell, including my Great Grandfathers. It is a place of beauty and peace. Or at least it has been since 1907......

it enacted by the Senate and

it enacted by the Senate and House of Representatives of the United States of America in Congress assembled,
SECTION 1. SHORT TITLE.
This Act may be cited as the ‘‘Veterans’ Memorial Preservation and Recognition Act of 2003’’.
SEC. 2. CRIMINAL PENALTIES FOR DESTRUCTION OF VETERANS’ MEMORIALS.
(a) IN GENERAL.—Chapter 65 of title 18, United States Code, is amended by adding at the end the following:
‘‘§ 1369. Destruction of veterans’ memorials
‘‘(a) Whoever, in a circumstance described in subsection (b), willfully injures or destroys, or attempts to injure or destroy, any structure, plaque, statue, or other monument on public property commemorating the service of any person or persons in the armed forces of the United States shall be fined under this title, imprisoned not more than 10 years, or both.
‘‘(b) A circumstance described in this subsection is that—
‘‘(1) in committing the offense described in subsection (a), the defendant travels or causes another to travel in interstate or foreign commerce, or uses the mail or an instrumentality
of interstate or foreign commerce; or
‘‘(2) the structure, plaque, statue, or other monument
described in subsection (a) is located on property owned by, or under the jurisdiction of, the Federal Government.’’.

Horrifying. A statue commemorating terrorism and slavery?!? Is there a statue of Osama bin Ladin or Hitler next to it? And a benign mention of the Klan as well. Disgusting.

This statue needs to be removed.

Its against the Federal Law

Unfortunately that statute appears to apply only to monuments "located on property owned by, or under the jurisdiction of, the Federal Government.’’.