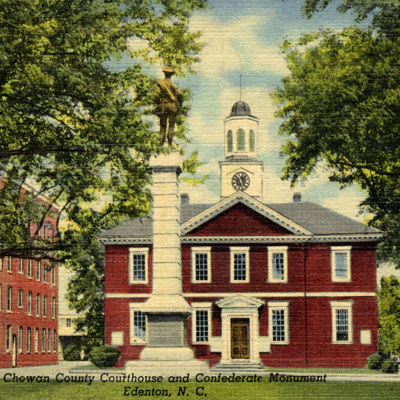 Description: This monument was built to honor the Confederate dead of Chowan County. The structure consists of a tall white granite shaft with a Confederate Common Soldier standing with his rifle at his waist and pointing forward. He looks ahead with a fixed and resolute stare. There are inscriptions on both the front and the back of the monument, with the dates for the Confederacy on the front and a poem honoring the dead on the back. The granite shaft is nineteen feet tall, with a bas-relief image of the Confederate flag unfurled on its pole, and the bronze figure is seven feet high.


Rear: Gashed with honorable scars, /
Low in Glorys lap they lie, /
Though they fell, they fell like stars, /
Streaming splendour through the sky.

Dedication date: The cornerstone and shaft of the monument were laid on June 3, 1904. The bronze soldier was dedicated on May 10, 1909.

Sponsor: Bell Battery Chapter of the United Daughters of the Confederacy. The first donation was made by a nine year old, W. D. Pruden, Jr., who gave two cents to the project.

Unveiling & Dedication: Fundraising began in 1901, and by 1904 the chapter had secured enough funds to erect the base and shaft which were dedicated on June 3, 1904. On that day, seventy-five veterans were in attendance for the services which included the conferring of twelve Crosses of Honor and the "Rebel Yell" given by their recipients. The bronze statue was unveiled on May 10, 1909.

Subject notes: In the Civil War, Chowan County contributed men to the Albemarle Artillery, composed of enlisted men from North Carolina's eastern counties. Company B of Moore's 3rd Battalion North Carolina Light Artillery were so named "The Edenton Bell Battery" to reflect the bronze bells from Edenton buildings that were melted down to make guns and cannon to equip the company.


The monument was built and dedicated in two stages. By 1904, sufficient funds had been raised to purchase and install the tall granite shaft. In 1909, the bronze soldier was added.

Location: The monument originally stood in the lawn in front of the Old Colonial Courthouse on East King Street. Although just steps from the waterfront, the monument was placed with the soldier's back to the bay as he faced north. Today the monument sits on South Broad Street in a median between the lanes of the street. The soldier still stands facing north.

Former Locations: The monument originally stood in the square in front of the historic Chowan County Courthouse on King Street. It was moved to its present location on South Broad Street in June 1961.

Landscape: The monument sits in a grassy median between the two lanes of the street. It is mounted on a red brick paved area amidst low evergreen shrubbery.