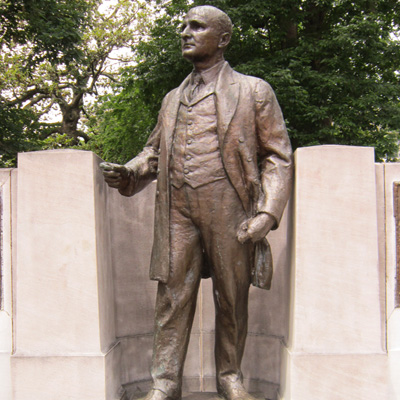 Charles Brantley Aycock Statue
Raleigh
View complete article and references at Commemorative Landscapes of North Carolina at: https://docsouth.unc.edu/commland/monument/109
Description: The Aycock statue is lodged inside a granite bay that is bordered by granite panels on either side, each of which contains a bronze relief plaque depicting different scenes. The wings of the wall are decorated with bronze plaques with related quotations by Aycock underneath. The plaque on the left, cast by the American Art Foundry, is a portrayal of what the Smithsonian American Art Museum refers to as "great thinkers and leaders in world history." It depicts images of the state of North Carolina and the Parthenon of Athens. The statue of Governor Aycock is opposite of the Vance monument on Union Square. Both monuments stand at approximately the same height of 8.5-feet.
Images: Front view | Rear view | Left panel | Rear center inscription | Right panel
Inscription:
Front: AYCOCK
Rear left:
AYCOCK'S IDEALS OF PUBLIC SERVICE /
"Equal! That is the word! On that word I plant myself / and my party - the equal right of every child born on Earth / to have the opportunity to burgeon out all there is within him." /
"No man is so high that the law shall not be enforced / against him and no man is so low that it shall not reach / down to him to lift him up if may be and set him on his / feet again and bid him Godspeed to better things."
"There is but one way to serve the people well, and that / is to do the right thing, trusting them as they may ever / be trusted, to approve the things which count for the / betterment of the State."
Rear center: CHARLES BRANTLEY AYCOCK / 1859 1912
Rear right: AYCOCK'S IDEALS FOR NORTH CAROLINA /
"I would have all our people to believe in the / possibilities of North Carolina: / in the strength of her men, purity of her women, / and their power to accomplish as much as can be / done anywhere on Earth by any people." /
"I would have them to become dissatisfied with small things, / to be anxious for higher and better things; / to yearn after real greatness; to seek after knowledge; / to do the right thing in order that they may be what / they ought."
"I would have the strong to bear the burdens of the weak / and to lift up the weak and make them strong, / teaching men everywhere that real strength consists / not in serving ourselves, but in doing for others."
Dedication date: 3/13/1924
Creator: Gutzon Borglum, Sculptor
Materials & Techniques: Bronze sculpture and plaques, granite base
Sponsor: Funding was provided by the North Carolina General Assembly, donations from North Carolina school children, and private donations to the Aycock Memorial Committee, initially led by George W. Royall of Goldsboro. Interestingly, African American educator Charles N. Hunter also participated in raising funds for the monument.
Post dedication use: One of Borglum's original plaques was removed and sent to Goldsboro, Aycock's hometown, in the 1930s. It was replaced by the current plaque of world history figures.
Subject notes: Charles Brantley Aycock was governor of North Carolina from 1901 to 1905. He is remembered as the "Education Governor" due to his dedication to public school reform. However, he also played a prominent role in the Democrat party's 1898 and 1900 election campaigns, which were marked by violence and virulent racism. He also was an outspoken proponent of the disfranchisement of blacks and of racial segregation. He died in 1912 while giving a speech about education, shortly after having been announced as a candidate for the US Senate.
Controversies: Aycock's role in the White Supremacy movement and his involvement in the Wilmington Coup of 1898 have led many to question the recognition given to him. However, while efforts have been made to remove his name from the title of an annual fundraiser for the Democratic Party and to educate the public on his faults as well as his merits, there has been no serious consideration of altering or removing the monument in Union Square.
Location: The monument is on Raleigh's Union Square as part of a 75 foot long memorial mall. The monument is located across from a similarly styled monument honoring Zebulon Baird Vance.
Former Locations: The monument was previously located on the south side of the Capitol Square. It was relocated in 1928 to the western end of a memorial mall as part of a landscaping plan undertaken by the Olmsted Brothers of Boston. The original placement of the monument was to ensure that students walking to the soon-to-be-completed Morson High School, a school for African Americans, would pass it every day.
Landscape: The monument is on Raleigh's Union Square as part of a 75-foot long memorial mall. The monument is located adjacent to a similarly-styled monument to Zebulon Baird Vance. Union Square has 14 monuments in total, including "Presidents North Carolina Gave the Nation", George Washington, Women of the Confederacy, a Confederate Monument, North Carolina Veterans' Monument, and Vietnam Veterans' Memorial.
City: Raleigh
County: Wake
Subjects: Historic Political Figures
Latitude:
35.77985
Longitude:
-78.63948
Subjects:
Monuments
Places
Authors:
Commemorative Landscapes of North Carolina
Origin - location:
Wake County
Raleigh
From:
Commemorative Landscapes of NC, University of North Carolina Chapel Hill.