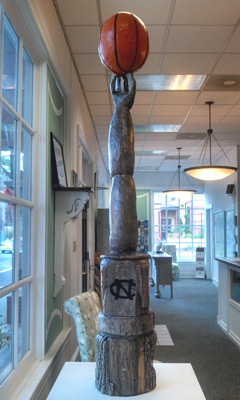 Description: Carved from a single piece of the trunk of an ash tree, the sculpture depicts an arm rising vertically from the base with a basketball perched atop the fingers on the hand. The base of the sculpture displays the organic qualities of the original trunk, and includes engraving on the front and sides. On a segment just above the bottom of the base, the carver engraved the logo of the University of North Carolina at Chapel Hill.

The sculpture was originally located at the site of the live ash tree on the corner of East Franklin and Columbia Streets. It was removed and subsequently restored and relocated approximately three years after carving due to rot and deterioration from the elements. The original carving was taller, displaying more of the trunk of the tree at the base, and was lighter in color. In the restoration, the already darkening wood was given several coats of sealant.

Dedication date: The sculpture was carved in 2009.

Subject notes: An ash tree, referred to as the "Championship Tree" or the "Tree for Victory", originally stood at the corner of Franklin and Columbia Streets in front of Spanky's Restaurant in Chapel Hill. The tree had succumbed to decay and was badly compromised during festivities on Franklin Street following the UNC Men's Basketball Team victory in the 2009 NCAA championship.

Shortly after the event, the stump was carved on location into a long arm with a hand at the tip holding a basketball painted orange. The sculpture remained there until 2012 after the wood had deteriorated further, necessitating removal. It was removed for refurbishment and relocation to a new home in town to be determined. The sculpture was refurbished and is now on display in the Chapel Hill and Orange County Visitors Bureau on West Franklin Street, just a few blocks west of the original site.


The sculpture was carved by Dwight Bassett, a wood carver, who also worked for the Town as its Economic Development Officer. Bassett apparently intended the sculpture as a temporary artistic expression, although it is now a piece of permanent public art.

Location: The Tree is located in the reception area inside the Chapel Hill and Orange County Visitors Bureau.

Former Locations: The live tree and sculpture were originally located in front of Spanky's Restaurant on the corner of East Franklin and Columbia Streets.