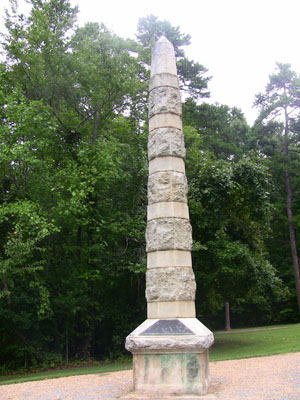 Cavalry Monument
Guilford Courthouse
View complete article and references at Commemorative Landscapes of North Carolina at: https://docsouth.unc.edu/commland/monument/141
Description: A large granite obelisk resting on a granite base, measuring 22'4'' in height and 4'10" in width at the base of the monument.
Nickname: Peter Francisco Monument
Inscription:
North Side: 1781 1909 / TO THE MARQUIS OF BRITIGNY / AND COL. WM. WASHINGTON / WHO WITH THEIR NORTH CAROLINA AND / VIRGINIA CAVALRY CHARGED AND RAN / THROUGH AND OVER THE 2ND. QUEENS / GUARDS IN THE VALLEY BELOW.
West Side: TO PETER FRANCISCO / A GIANT IN STATURE, / MIGHT AND COURAGE - WHO SLEW / IN THIS ENGAGEMENT ELEVEN OF THE / ENEMY WITH HIS OWN BROAD SWORD / RENDERING HIMSELF THEREBY PERHAPS THE MOST / FAMOUS PRIVATE SOLDIER OF THE REVOLUTIONARY WAR.
Dedication date: The monument was completed in 1909 but it was not dedicated until July 4, 1910.
Materials & Techniques: Granite with bronze tablets.
Unveiling & Dedication: At the unveiling the Honorable B.F. Dixon gave an address.
Subject notes: Peter Francisco was born in 1760; he was an American patriot and soldier in the American Revolutionary War. At the age of 16, he joined the 10th Virginia Regiment and was known for his size and strength. Though the inscription claims he killed eleven of the enemy, according to Francisco's account of the battle he only killed four.
Controversies: The monument was supposed to mark where the third line of American troops were. However park historians now believe the third line was actually farther to the east.
Landscape: The monument is located beside a foot trail in the park, near a tour stop.
City: Greensboro
County: Guilford
Subjects: Revolutionary War
Latitude:
36.13319
Longitude:
-79.83948
Subjects:
Monuments
Places
Authors:
Commemorative Landscapes of North Carolina
Origin - location:
Guilford County
Greensboro
From:
Commemorative Landscapes of NC, University of North Carolina Chapel Hill.