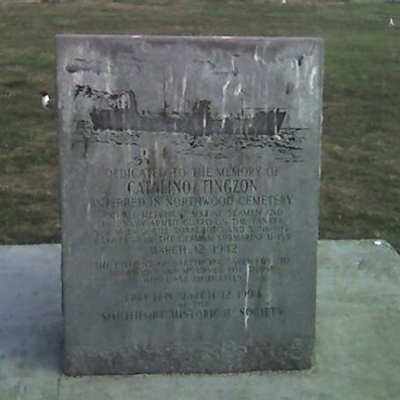 Description: The monument is a low granite stele set in a concrete base. The front and back faces are smooth stone and bear inscriptions. The sides are rough or uncut stone.

Inscription:
Front inscription: DEDICATED TO THE MEMORY OF / CATALINO TINGZON / INTERRED IN NORTHWOOD CEMETERY / AND ALL MERCHANT MARINE SEAMEN AND / U. S. NAVY ARMED GUARD ON THE TANKER / S. S. JOHN D. GILL TORPEDOED AND SUNK OFF / CAPE FEAR BY THE GERMAN SUBMARINE U-158 / MARCH 12, 1942 / THE CITIZENS OF SOUTHPORT CARED FOR THE / SURVIVORS AND MOURNED FOR THOSE / WHO LOST THEIR LIVES. / ERECTED MARCH 12, 1994 / BY THE/SOUTHPORT HISTORICAL SOCIETY

Unveiling & Dedication: More than three hundred people attended the unveiling at the waterfront on a cold March day in 1994. Susie Carson, on the board of the Southport Historical Society, served as the "master of ceremonies" and gave the address.

Subject notes: The stone slab commemorates the sinking of the S. S. John D. Gill, an American merchant marine tanker ship torpedoed off the North Carolina coast by the German submarine U-158 on March 12, 1942 on its return to Philadelphia. Twenty-three men were killed in the German attack on the ship, one of whom was a young Filipino sailor named Catalino Tingzon who is buried in an unmarked grave in Northwood Cemetery.

Location: The memorial is located in Waterfront Park, with its back facing the Cape Fear River.

Landscape: The monument is located in a grassy area of the park, between a walkway and the water.