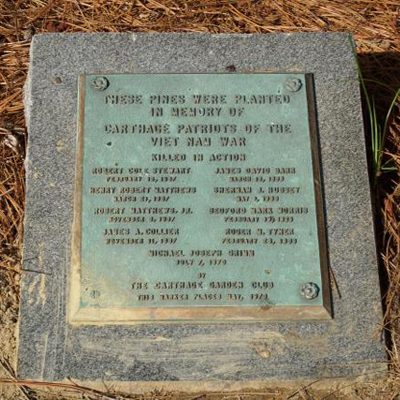 Carthage Patriots of the Viet Nam War
Carthage
View complete article and references at Commemorative Landscapes of North Carolina at: https://docsouth.unc.edu/commland/monument/311
Description: This monument presents a commemorative plaque placed on a granite stone. The stone is slightly raised off the ground, and the plaque faces upward. Pine trees planted as part of the commemoration surround the monument. The inscription honors the citizens of Carthage who were killed in action during the Vietnam War.
Inscription:
THESE PINES WERE PLANTED / IN MEMORY OF / CARTHAGE PATRIOTS OF THE / VIET NAM WAR / KILLED IN ACTION
[Names listed on the left:] ROBERT COLE STEWART / FEBRUARY 18, 1967 / HENRY ROBERT MATTHEWS / MARCH 31, 1967 / ROBERT MATTHEWS, JR. / NOVEMBER 11, 1967 / JAMES A. COLLIER / NOVEMBER 11, 1967
[Names listed on the right:] JAMES DAVID BARR / MARCH 18, 1968 / SHERMAN J. HUSSEY / MAY 1, 1968 / BEDFORD MARK MORRIS / FEBRUARY 19, 1969 / ROGER M. TYNER / FEBRUARY 23, 1969
[Center of plaque at bottom:] MICHAEL JOSEPH GRIMM / JULY 7, 1970 / BY / THE CARTHAGE GARDEN CLUB / THIS MARKER PLACED MAY, 1979
Dedication date: May 1979
Materials & Techniques: Granite, bronze
Sponsor: The Carthage Garden Club
Subject notes: The Vietnam War was fought in the midst of the Cold War. United States involvement in the war was out of fear of the domino effect of Communist takeover of southeast Asia and South Vietnam, in particular. Guerilla warfare took place in Vietnam, and many innocent Vietnamese lives were lost, along with the lives of many American military men. On August 15, 1973 United States military involvement in Vietnam came to an end.
Location: The monument is located near the intersection of McReynolds and Barrett Streets in Carthage.
Landscape: The monument is located in a wooded area surrounded by pine trees.
City: Carthage
County: Moore
Subjects: Vietnam War
Latitude:
35.34745
Longitude:
-79.41831
Subjects:
Monuments
Places
Authors:
Commemorative Landscapes of North Carolina
Origin - location:
Moore County
Carthage
From:
Commemorative Landscapes of NC, University of North Carolina Chapel Hill.