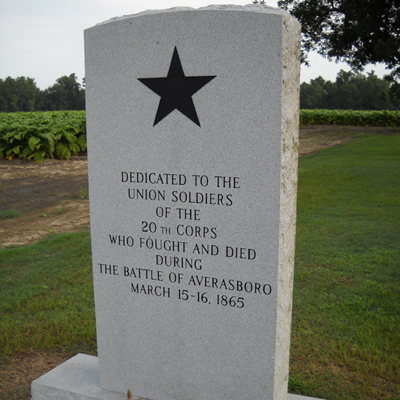 Post dedication use: The Averasboro Battlefield hosts many events throughout the year, including battle re-enactments.

Subject notes: Approximately 650 Union soldiers were killed in the Battle of Averasboro, many of them members of the 20th U. S. Army Corps, also known as Hooker's Corp. The men of the 20th Corps were under the direction of General Sherman.

Location: The monument is located on Averasboro Battlefield. Several other monuments to the battle are located nearby. These include: a monument to the North Carolina Soldiers erected by the United Daughters of the Confederacy, a monument to the Confederate dead erected in 1872 in nearby Chicora cemetery, and a monument to the South Carolina troops involved in the battle. In addition, the 20th Corps monument was designed and dedicated with a companion monument dedicated to the fallen Confederate soldiers under Rhett's Brigade of General William J. Hardee's army. This is located in close proximity to the 20th Corps monument.