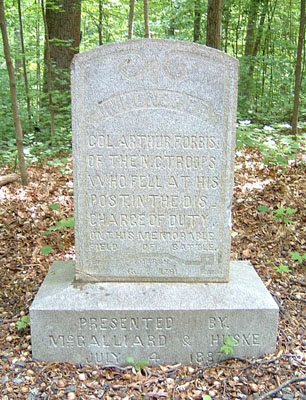 Arthur Forbis Grave
Guilford Courthouse
View complete article and references at Commemorative Landscapes of North Carolina at: https://docsouth.unc.edu/commland/monument/64
Description: This monument in the shape of a traditional tombstone marks the grave of Colonel Arthur Forbis, who was mortally wounded during the battle at Guilford Courthouse. The monument is 2 feet high and 6 inches thick, set in a base of the same stone.
Inscription:
Tombstone: IN HONOR OF / COL. ARTHUR FORBIS / OF THE N.C. TROOPS / WHO FELL AT HIS POST IN THE DIS / CHARGE OF DUTY / ON THIS MEMORABLE / FIELD OF BATTLE / MARCH 15 1781
Base: PRESENTED BY MCGALLIARD & HUSKE / JULY 4, 1887
Dedication date: July 4, 1887
Materials & Techniques: Granite.
Sponsor: McGalliard and Huske Stoneworks of Kernersville, NC
Cost: $Valued at 200 dollars, but dedicated by the quarry that cut it.
Subject notes: Arthur Forbis was a Captain in the Guilford County militia under Colonel James Martin. He acted as commander of the Guilford militia in Martin's absence, while Martin rode to the courthouse to rally fugitives.
Former Locations: Immediately after his death, Forbis was buried at Alamance Presbyterian Church. His remains were moved to the park in 1887.
Landscape: The monument to Forbis was the first monument erected on the battlefield.
City: Greensboro
County: Guilford
Subjects: Revolutionary War
Latitude:
36.13004
Longitude:
-79.84807
Additional information from NCpedia editors at the State Library of North Carolina: :

This record indicates that David Schenck had Arthur Forbis' body moved from his original burial place in Alamance County to the Guilford Battleground site.  While Schenck and the Battleground Company did have several bodies relocated from their original resting places to the battleground park, it is unclear the source of this information about Forbis.  NCpedia is researching this question and will add an update as needed.