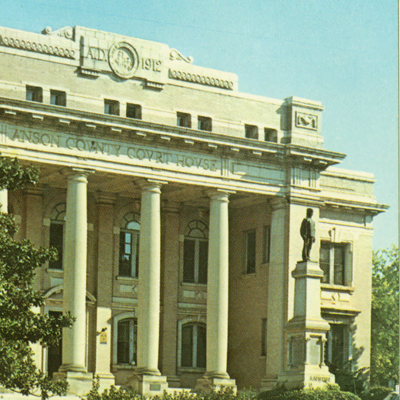 Anson County Confederate Soldiers Monument
Wadesboro
View complete article and references at Commemorative Landscapes of North Carolina at: https://docsouth.unc.edu/commland/monument/315
Description: This monument was built in memory of the Confederate soldiers from Anson County who were killed during the Civil War. The structure consists of a tall, multi-tiered white granite base and column supporting a bronze Confederate Common Soldier. Standing at parade rest, the soldier rests the butt of his gun on the ground near his feet. An ornate, darker granite section rests on top of the first three tiers of the base, and the four sides of this darker granite face are inscribed. Each corner of this section is framed by a Roman-style column, capped with acanthus leaves.
Inscription:
North face: BY THIS MONUMENT WE / TRANSLATE OUR HOMAGE / FOR THE SOLDIERS OF / ANSON COUNTY / WHO SERVED IN THE WAR / BETWEEN THE GOVERNMENT / AND THE CONFEDERATE / STATES.
East face: TO COMPANIES / C-14th. / A-23rd. / K-26th. / B-31st. / H-43rd. / I-43rd. / K-43rd. / A-59th. REGIMENTS / NORTH CAROLINA TROOPS / AND ANSON SOLDIERS / IN OTHER COMMANDS.
South face: ERECTED UNDER THE AUSPICES OF ANSON CHAPTER NO.357 / UNITED DAUGHTERS OF THE CONFEDERACY / JANUARY 19, 1906.
West face: THESE MEN EMBRACED THE PRINCIPLES OF THEIR LEADERS. THEY BELIEVED OUR SOCIAL / INSTITUTIONS AND OUR RIGHT OF LOCAL SELF-GOVERNMENT IMPERILED BY THE AVOWED / HOSTILITY OF A LARGE SECTION OF THE UNION, THEY RESISTED WITH EVERY DEVICE OF / HONORABLE WARFARE. THE GLORY AND GRIEF OF BATTLE WON AND LOSS SOLDERED THEM.
On the base: ANSON
Dedication date: 1/19/1906
Materials & Techniques: Granite, bronze
Sponsor: United Daughters of the Confederacy, Anson Chapter No. 357
Cost: $3,000
Unveiling & Dedication: The cornerstone was laid in a dedication ceremony on January 13, 1906, and the monument was unveiled and dedicated on January 19, 1906. The cornerstone dedication ceremony was attended by Anson Camp Daughters of the Confederacy, many old veterans, and a substantial gathering of citizens. The meeting was called to order by Major W. A. Smith and the prayer was given by reverend A. B. Caudle. Colonel Bennett declared that the monument had the greatest likeness of a Confederate soldier in uniform of any monument in the South. The main address was given by Captain John C. McLauchlin. Following the speech, the cornerstone of the monument was laid in front of the court house by Major Smith.
The Wadesboro newspaper reported beautiful weather for the unveiling ceremony. The dedication began with a march from the library to the courthouse by more than 100 old Civil War veterans and the United Daughters of the Confederacy. The exercises were held in the courtroom where Major William A. Smith of the Anson Camp of Confederate Veterans presided over the ceremony. General Lee's favorite hymn was reported to have been sung, and Dr. William C. Power, a chaplain of Colonel Bennett's regiment, gave an address followed by an address by Colonel Bennett of the 14th North Carolina Volunteers.
Subject notes: The Confederate Soldier was reportedly modeled after John Randle Richardson, an Asheville native and Civil War veteran who was a member of the 23rd Regiment, Company A North Carolina Troops. The inscription was written by Colonel Reisden T. Bennett.
Location: The monument sits in front of the entrance to the Anson County Courthouse at North Greene Street.
Landscape: The monument sits on the right side of the walkway to the steps of the courthouse, amidst low shrubs and mature trees.
City: Wadesboro
County: Anson
Subjects: Civil War
Latitude:
34.96633
Longitude:
-80.07545
Subjects:
Monuments
Places
Authors:
Commemorative Landscapes of North Carolina
Origin - location:
Anson County
Wadesboro
From:
Commemorative Landscapes of NC, University of North Carolina Chapel Hill.