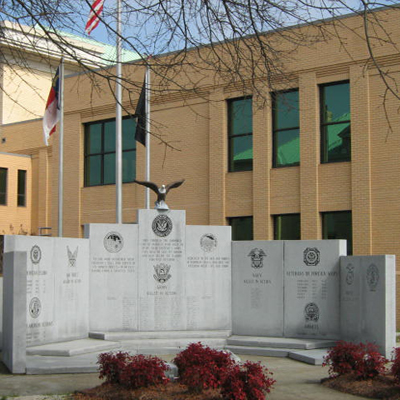 Description: The monument is composed of nine engraved granite slabs arranged in a semicircle outside the courthouse. The slabs increase in height toward the center, and the center slab topped with an eagle. The monument has three flagpoles behind the slabs.

Inscription:
Center slab: They stood in the unbroken line of patriots who lived to bear their country's arms. They died to save its honor and keep aglow the flaming torch of freedom. / Army
Killed in action / [list of names]

Post dedication use: This monument has become a site for Veterans Day and Memorial Day activities and ceremonies.

Landscape: The memorial sits between the old Randolph County Courthouse and the new courthouse.