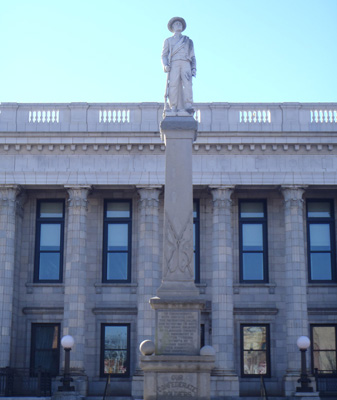 Alamance County Confederate Monument
Graham
View complete article and references at Commemorative Landscapes of North Carolina at: https://docsouth.unc.edu/commland/monument/10
Description: The monument has a single column mounted on a square base with the entire structure standing approximately thirty feet high. At the top of the column is a stalwart Confederate soldier at parade rest looking north. He steps forward with his left foot while resting the butt of his rifle near his feet. The column is engraved with a pair of Confederate flags. At the bottom of the column is a pedestal on which four round orbs sit.
Inside the concrete base of the monument is a copper box containing the names of 1,100 Confederate soldiers in the Civil War from Alamance and the names of contributors to the monument's fund. It also holds a number of confederate relics including Confederate money, papers of that day, several old coins and the names of the members of the Graham Chapter of the Daughters of the Confederacy.
Images: View of column and statue from side | Front view of statue | North and east inscriptions | South and east inscriptions | South inscription | Vintage postcard image | Vintage postcard image
Inscription:
North face: TO COMMEMORATE WITH GRATEFUL LOVE THE PATRIOTISM, VALOR, AND DEVOTION TO DUTY, OF THE BRAVE SOLDIERS OF ALAMANCE COUNTY, THIS MONUMENT IS ERECTED THROUGH THE EFFORTS OF THE GRAHAM CHAPTER, UNITED DAUGHTERS OF THE CONFEDERACY / OUR CONFEDERATE SOLDIERS
South face: ON FAME'S ETERNAL CAMPING GROUND, THEIR SILENT TENTS ARE SPREAD, AND GLORY GUARDS, WITH SOLEMN ROUND, THE BIVOUAC OF THE DEAD. / 1861. C. S. A. 1865.
East face: FAITHFUL UNTO DEATH, THEY ARE CROWNED WITH IMMORTAL GLORY.
West face: CONQUERED THEY CAN NEVER BE, WHOSE SPIRITS AND WHOSE SOULS ARE FREE.
Dedication date: 5/16/1914
Creator: McNeel Marble Co., Supplier
Materials & Techniques: The base and column are made of Winslow granite while the figure is carved out of Italian marble.
Sponsor: The Graham Chapter, The United Daughters of the Confederacy
Cost: $2100
Location: It is located in Court Square, on the north side of the Alamance County Courthouse.
Landscape: Monument lies across from the Sesquicentennial Garden and in close proximity to various old establishments of Graham, such as Wrike Drug and The Harden House.
City: Graham
County: Alamance
Subjects: Civil War
Latitude:
36.06954
Longitude:
-79.40035
Subjects:
Monuments
Places
Authors:
Commemorative Landscapes of North Carolina
Origin - location:
Alamance County
Graham
From:
Commemorative Landscapes of NC, University of North Carolina Chapel Hill.